Share All sharing options for: Derek Holland and defining "erratic"

So I was reading T.R. Sullivan's piece on the Rangers' rotation options for 2012, and this item jumped out at me:

(Derek Holland) has a tendency to be erratic, but that disappeared in the second half of last season, when he went 9-1 with a 3.06 ERA in 14 starts.

For the season as a whole, Derek Holland had 6 starts where he posted a Game Score of 25 or lower. In the A.L., Brian Duensing, Fausto Carmona, Jason Vargas, Jeff Francis, John Lackey and Carl Pavano also had 6 25-or-lower starts. Not a single A.L. starter had more than 6 25-or-lower starts, however.

Derek Holland also had 5 starts in 2011 where he posted a Game Score of 75 or higher. James Shields had 12. Jered Weaver had 10. Justin Verlander had 9. C.C. Sabathia and Felix Hernandez had 7. Gavin Floyd, Ricky Romero and Jason Vargas had 6. C.J. Wilson, Dan Haren, David Price and Gio Gonzalez had 5.*

In 2011, Holland was tied for the most "disaster" starts, and was in the top 10 for the most "great" starts, in terms of Game Score. Holland's defining characteristic in 2011 was that he was erratic.

Here's his game logs from the second half of the season: 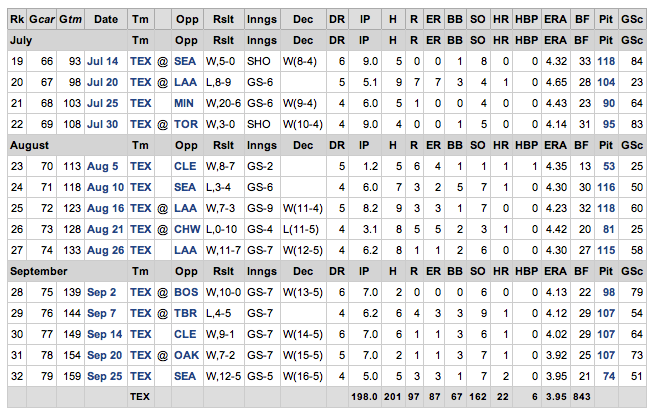 Holland had three Game Scores of 25 or less in the second half of last season, and three of 79 or more. Three of Holland's 14 second-half starts were disasters, and four of them saw him allow no earned runs.

That erraticism carried over to the postseason, as well...in his first three starts of the 2011 postseason, Holland went 5, 2.2, and 4.2 innings. He was okay against Tampa in the ALDS, was terrible in Game 2 of the ALCS, and was mediocre in Game 6 of the ALCS (3 homers allowed while facing 19 batters).

That performance was what led the Rangers to flip-flop Holland and Matt Harrison in the World Series, with Harrison getting the game 3 and game 7 starts, and Holland being bumped to #4 in the rotation. Holland, of course, responded with his incredible Game 4 outing.

Derek Holland had a very good 2011 season, and there's reason to hope that he can build on that success in 2012. However, suggesting that Holland wasn't erratic in the second half of the season, or that he showed signs of being less erratic then, is just not correct.