The short and sweet of it is: It's simple really. It doesn't have to be about the Ginger Ale this time. It doesn't need to be about the dogpile in the infield. Even though we'll laugh and cherish the memories, the team knows it's not about the photo op with goggles and champagne soaked officially licensed t-shirts. It's about the win. A single win. It's really that simple. Win a baseball game.

That isn't to say it won't be special. It will be. It always is. Winning a division in baseball is among the hardest things to do in sports. It should be celebrated. It should be rewarded. And as much grief as I've given the idea of the extra Wild Card, winning the division means more now than ever. And that's why this is about that win.

With that win, the Rangers would clinch their third consecutive American League West division title for the first time in franchise history. That's a big deal. We know this is the best era of Rangers baseball but we keep running into proof. Though this franchise dominated a chunk of time to end the 1990s, there was never really a team like Anaheim to slay in those days. There was a pesky California Angels team and an All-Star saturated Mariners team that perhaps mirror the "Los Angeles" Angels of 2012, but the current Angels had won this division for seemingly a decade before the Rangers overthrew them in 2010. Now the Rangers have held off all comers for consecutive years and need one final win to make it a third in what has now become the best division in baseball.

This series will also mark the last time we'll watch the Rangers play in games that aren't playoff baseball games--even though they still have the weight of pennant chase baseball. This is it for the 2012 regular season. Time to retire the pocket schedules. This is the last time we'll have Fox Sports Southwest broadcasts for months and months. This may well be the last regular season series we have with Josh Hamilton, Mike Adams, Mike Napoli, Koji Uehara, Roy Oswalt, Scott Feldman, and Ryan Dempster. But in the end, it's not about 2012 goodbyes. It's about a win and a brand new ballgame.

Here's a breakdown of the pitching match-ups against the postseason bound 2012 co-Cinderella Oakland A's:

Advantage: Who would have guessed the Rangers would need a win in the final series of the season and one of those games would be started by Martin Perez? This is essentially Perez's World Series Game 7. It's the last time Perez will start a game this season and very likely his final appearance for the Rangers in 2012. It's also the biggest start of his career so far for a 21 year old with the least amount of experience in a situation like this for the Rangers in years. No pressure or anything, 'teen. Of course, the A's have been doing this practically all season. Just running out a rookie in the rotation all season when needed--and in this case, it's needed in all five of their spots in the rotation--and somehow making it work. Jarrod Parker is one of their more experienced rookies (if you want to count the third of an inning he pitched for Arizona in the NLDS last season) and has been great this season. Martin Perez has the physical ability to pitch up to this task, but Parker has the results already. This seems like a clear advantage for the A's in the opener.

Advantage: And this seems like a clear advantage for the Rangers. It's Matt Harrison in You Can't Scare Me! over a Travis Blackley the Rangers just hung five runs on in an inning last Thursday. However, in that same game, Harrison allowed four runs himself over six innings. There is some concern that Harrison might be running out of gas here in the final week of the season as he's now pitched 22 more innings than in any season of his career. It would be nice if Perez and the Rangers could pull off a win tonight and allow Harrison to use this game as a tune-up for the playoff innings the Rangers will need from him in a week from now. If not, this becomes an extremely important game because this is the match-up that favors the Rangers the most.

Advantage: Ryan Dempster isn't facing the Yankees or the Angels so it might just be okay. A.J. Griffin hasn't been able to get out of the 6th inning in any of his last three starts and was done before completing five innings in two of his last three outings. Griffin also has a 2010 Trevor Cahill-esque BABIP and a Jered Weaver-esque strand rate. So, he's a little smoke and mirrors right now but you can't count on that changing in the sample of only one single game. If it comes down to this game as far as who wins the American League West, this is probably more of a push than we'd hope but perhaps Dempster has a little of that October Colby magic waiting for us. 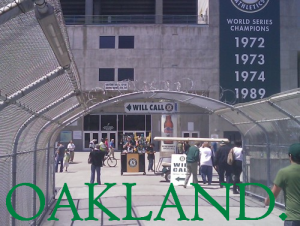