The good news is the World Series is almost here. For baseball fans, that's pretty exciting. The World Series! That also means we can soon get on with this whole offseason roster building stuff. The bad news is the Cardinals, Giants or Tigers will win the World Series. I don't want to watch any of those possibilities. I'm ready for the postseason to end already.

Richard Durrett continues his "Texas Ten" series with a look at what the Rangers might do with Jurickson Profar in 2013. (Mentally, a 2013 baseball season already seems weird.)

Gerry Fraley has more on Japanese High School pitcher Shohei Otani's decision to sign with a Major League organization instead of electing for the NPB draft in Japan. The Rangers are among a handful of teams who have visited Otani in Japan and are thought of as one of the leading contenders to sign him along with Boston and the Los Angeles Dodgers. 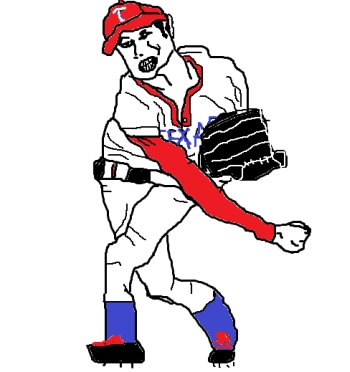 Rold Gold ain't got nothin' on that follow-through!

Evan Grant takes a one-by-one look at the 2012 lineup to dissect the problems that led to the statistical under-performance by the offense last (!) season.

And that's it. Enjoy your day.