We're in the baseball offseason deep freeze and baby it's cold outside.

Jon Heyman has quotes from folks with the Diamondbacks stating they believe there's a 90% chance that Justin Upton won't be traded this offseason. There's also quotes from Diamondbacks' owner Ken Kendrick corroborating those thoughts. Still, for you JUps fetishists, 90% just sounds like, "Is that still a 'no' on Elvis Andrus?" to me.

The DMN has a transcript of Jim Bowden on KESN-FM where he discussed what the Rangers might do with the Andrus/Jurickson Profar/Ian Kinsler triumvirate and Mike Olt's current trade value.

We already know that the Rangers are going to be playing a couple of exhibition games at the Alamo Dome against the San Diego Padres but I've found this article on the San Antonio Express-News website that had this image: 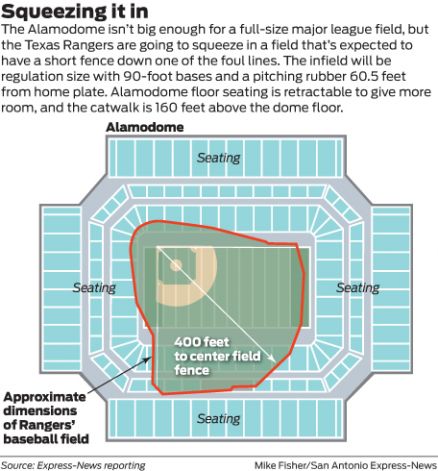 And now I'm intrigued by how this is even going to work.

And that is all for today, except...

Did you know Michael Bay directed the music video for Meat Loaf's I'd Do Anything for Love (But I Won't Do That)?

Did you know Michael Bay's cousin (Susan Bay) is married to Leonard Nimoy?

Did you know that the last time Notre Dame was No. 1, they lost to Boston College the following week?