I can't really think of a less relevant opponent for the Rangers than the Diamondbacks of Arizona. Maybe there are connective threads in that both of these teams play baseball. It's not like this is the Rangers versus the Memphis Grizzlies. That would be strange. The Memphis Grizzlies play basketball; it's an entirely different sport than baseball. I bet Zach Randolph would be a poor defender/washed up power hitter in the Carlos Lee mold. Craig Gentry would make a fine JJ Barea-type pesky point guard, perhaps. But I digress.

So, relevancy. I guess both of these teams reside in the American Southwest. That's something. Geography based rivalries have suited us well. If not for Houston playing baseball in the same state as the Rangers, where would the Silver Boot be? We'd be lost without our Lone Star Series.

The schedule trumps relevancy anyway, right? It's not like the Rangers can object to playing the Diamondbacks, because there's no reason for them to be playing the Diamonbacks, and call up the Kansas City Royals to see if they can get out of their plans with the Milwaukee Brewers and maybe meet up for drinks or a game or three, can they? I'd assume that's not allowed.

There's an alternative universe where the Arizona Diamondbacks were moved the American League West years ago. In that world, this is a hotly contested rivalry. We curse Ryan Roberts and his stupid tattoos. We sometimes commiserate over our collective Buck Showalter years. We think back to the good ol' days when Randy Johnson spurned the Diamondbacks to give new Rangers owner Tom Hicks the big splash he was looking for. But this is not that universe. In this universe, the Diamondbacks might as well be the Winnipeg Jets.

As much as I can't find a reason for these games to be played; believe it or not, they still count. So the Rangers will play the Arizona Diamondbacks and it will matter in the standings. But will it matter in our hearts? I think I have Interleague fatigue.

Here's a breakdown of the pitching match-ups against a Diamondbacks team that I don't really care about at all:

Advantage: This is pretty much a push with a slight edge to Ian Kennedy and his mighty red beard over Colby Lewis and his old man hip.

Advantage: This is also pretty much a push but I'll give the slight edge to Matt Harrison: The Blob That Ate Everyone over Wade Miley who I had no idea was good at throwing baseballs until 10 minutes ago.

Advantage: Hey, guess what? This has also been sort of a push. Daniel Hudson is probably the better pitcher but I'll give Feldmania the bad luck advantage with his insanely unfortunate 48.3% LOB over Hudson's sort-of-a-bummer .333 BABIP. 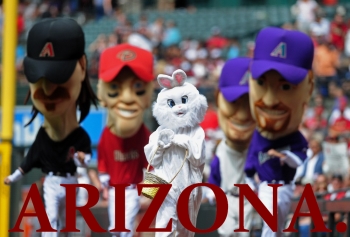