PetCo Park is a pitcher's paradise. We know this. Just like how we know The Ballpark is a hitter's haven and no national broadcast will ever let us forget it. So just how difficult is it to hit in San Diego, CA versus Arlington, TX? Consider the park factors. In Texas, the park factor for hitting a home run is 121/113 (LHB/RHB) whereas in San Diego it's 59/95. It's over twice as easy for a left-handed hitter to hit a home run at The Ballpark as it is at PetCo given all circumstances being equal. Golly!

Similarly, the Padres' park limits the ability to get on base to well below the league median. The PetCo park factor wOBA is 90/92 compared to 104/107 at The Ballpark. It's not only harder to reach base at PetCo, it's harder drive in runners. PetCo falls below the median in nearly every positive offensive category other than left-handed hitters hitting triples. Oh those deep, expansive alleyways. Get one by Cameron Maybin and you can run for days.

The Rangers were able to coax Mike Adams out of the Padres last season (though the Ernesto Frieri trade leads one to wonder just how difficult it is to persuade the Padres) specifically because Robert Erlin and Joe Wieland profile as the types of pitching prospects--some fly ball tendencies, average K/9--that are better suited to succeed at PetCo rather than Arlington. For this we should be thankful for PetCo and its evil designs on destroying the high scoring baseball that we know and love.

While the Rangers are one of the best offensive teams in baseball, the Padres simply aren't. So it's sort of unfair to compare the two teams. But I'm going to do it anyway. The Padres team adjusted-for-park wOBA is currently a paltry .313. That's the equivalency of a team comprised of Freddie Freemans. The Rangers team adjusted wOBA is a relatively robust .348 which is akin to a team of Alex Rodriguezs. The difference between Freddie Freeman (0.6) and Alex Rodriguez (1.4) by WAR is nearly a win. We'll call this a Win Above Freeman. The Rangers hold a .8 WAF over the Padres thanks to talent and not hitting in run suppression hell.

Also, pitchers hit at PetCo. That has to count for something. Maybe that word hit back there should have been in parenthesis because pitchers don't really hit so much as try to stay out of their own way long enough to avoid embarrassing themselves or landing on the disabled list with junk sprains. That's how the National League rolls. All bunts and groins. Unless we're talking about Carlos Zambrano. Carlos Zambrano is a big man and he deserves your respect.

Here's a breakdown of the pitching match-ups for this series against the Fathers of America's Finest City:

Advantage: Matt Harrison in Ghost Beach over wow Jason Marquis is bad. Marquis even Ks less hitters than Harrison. I'm sure the recent Rangers offense in PetCo will find a way to make Marquis look good for a couple of innings though. Be prepared.

Advantage: Believe it or not, Scott Feldman is actually pitching only nominally worse as a starter than he pitched in his 17-8 season in 2009. Feldman has a 4.51 FIP and 4.57 xFIP this season compared to 4.31 FIP and 4.43 xFIP in 2009. The difference is Feldman stranded runners 72.8% of the time in 2009 which is nearly exactly luck neutral. This season, Feldman is stranding only 45.8% of runners. That's insanely unlucky. More than half of every baserunner that Feldman has allowed to reach base has scored. Madness. It also doesn't help that allowing everyone on the planet to score is leading to less innings over Edinson Volquez being lucky but still not good. (I'd probably take Volquez in this game, honestly. I'm just rooting for Feldman to finally catch a break in what might be his last start.)

Advantage: Yu Darvish in PetCo over my advice to you, for your fantasy baseball team, is to drop the Anthony Bass. (Wub wub wubwubwubwubwub wubwub wub) 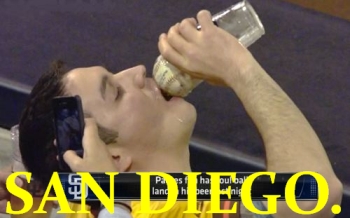