For some reason it works every year except in October. Since 2009--the era in which the Rangers have been a good baseball team--the Rangers have dominated the National League in Interleague play. The Rangers are 44-25 in the last nearly four years of battles against the Warren C. Giles residents. Only the Yankees top Texas over this span at 45-24.

This season, the Rangers are 12-3 in such contests with only these three games against the Rockies remaining on the 2012 Interleague schedule. For as much as I complain about National League baseball, it's been good to the Rangers. Though, one could argue the reason it "works" is because the team the Rangers have played most often in Interleague play has been the Houston Astros. The Silver Boot always shines a light.

And so, after like half a year of rumors that Oswalt would sign with the Rangers; and after about all but a week of that span spent debating whether or not an Oswalt signing would be superfluous; and after a month of minor league tuning, Oswalt debuts as a Texas Rangers. It seems now that it was destined to always be. What this baseball kismet has wrought has not yet been revealed.

No one really knows what Oswalt will give the Rangers. You've likely heard the arguments for and against having him here many times over. The need arose because the Rangers rotation health luck finally crapped out. Here's hoping he's more Joe Nathan, Andy Pettitte, or 2010 second half Roy Oswalt than Brandon Webb or 2011 Roy Oswalt with 2011 Roy Oswalt's back. Still, 2011 Roy Oswalt was a 2.5 fWAR pitcher over 23 starts. The Rangers would take that over the rest of this season and gladly.

2011 Oswalt allowed three or less runs in 16 of those 23 starts. The Rangers have allowed three runs or less in 42 of 70 games this season. For June, it's 14 of 19 and nine of the last ten. If Oswalt can give the Rangers a back pain free 60% of a season worth of quality starts, given the need now, he'll be worth the hire. That begins tonight with a chance to beat up on the National League which is something both Oswalt and the Rangers are familiar with.

Here's a breakdown of the pitching match-ups for this series against the Mile-High Mountain Men:

Advantage: The idea of the Rangers drafting Christian Friedrich was once kicked around by Nolan Ryan over Roy Oswalt once played kick the can with Nolan Ryan in their youth. While Friedrich's K rate is pretty salty, you'd assume a healthy Oswalt would perform better than a green Friedrich the rest of the way. This one game isn't about the rest of the way, however.

Advantage: Colby Lewis having a fantastic season with an assist from some favorable luck stats over Josh Outman having...a great name for a pitcher? Though Outman is also sporting a rather Feldmanian strand rate.

Advantage: Matt Harrison in Stay Out of the Basement over Alex White allowed more runs in his last start than the Rangers' starters in this series have allowed combined in their last 48.1 innings. 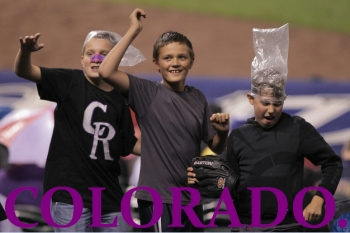