Baseball is a sport where foregone conclusions can make you look silly with the advantage of hindsight. Over the winter the Detroit Tigers were coming off an appearance in the American League Champion Series, had just signed Prince Fielder, and were gifted enough to continue residing in the American League Central. Nothing in baseball seemed more like a sure thing than the Tigers running away with the Central.

The Tigers, after all, had the third best record in the American League last season. The Tigers had Justin Verlander coming off a great season. The Tigers had Miguel Cabrera coming off a season where he could have been league MVP if not for his teammate Verlander. Let's face it, it was supposed to be easy. That it hasn't been--that the Tigers are playing below .500 baseball and are in third place--is sort of noteworthy. The reason it is only sort of noteworthy is because baseball has had a long history of making sure nothing is easy.

But it's not like we haven't seen this before from many teams nearly every season. In fact, it's even happened recently in Tigers history. For the 2008 season, the Tigers acquired Cabrera from the Marlins a year removed from going to the World Series and were enormous favorites in the A.L. Central. Those Tigers lost 88 games and finished in last place. That team started 2-10 and never recovered. In fact, the 2008 Tigers never spent a single day in first place after spending an entire off-season penciled into the playoffs.

It's not quite as dire this season for the Tigers, but it is similar. While the 2008 Tigers were 34-38 after 72 games, these Tigers are 35-37. The difference is, unlike 2008, no team in the Central is pulling away. While the 2008 Tigers were 6 games back in their division at this point in the season, the current Tigers are only 3 games back of the White Sox. There's still plenty of time for the Tigers will live up to expectations. I assume they will. There's 90 more games for talent to eventually win out. But assumption is what got us here in the first place.

Of course, there were signs. The Tigers are last in all of baseball in fielding by UZR, UZR/150, and 26th in Defensive Runs Saved. We all knew the Tigers were going to be terrible defensively and it is costing them baseball games. As fun as the thought of Prince Fielder launching balls over the home run porch in right field at The Ballpark was when the Rangers were flirting with signing him, Fielder's surprise signing with the Tigers has been a gift to baseball fans who enjoy the schadenfreude of bad defense. This will be Fielder's first shot at Arlington since those winter daydreams. Watch out All-You-Can-Eat seat patrons. Hold on to your nachos.

As for the Rangers, there are no more games left against the Senior Circuit on the schedule. This is bittersweet. While I was busy being snarky at the expense of Interleague play, the Rangers were busy finishing with the best record in baseball against their opposite league opponents. Now there's nothing left to do but beat up on the American League again. Ho-hum.

Here's a breakdown of the pitching match-ups for this series against the Motor City Kitties:

Advantage: Yu Darvish finally having a BB/9 under 5 over Drew Smyly has blister issues without brine soak tips from Nolan Ryan. 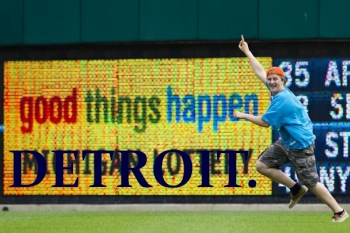 Rangers Record vs. Detroit: 3-1 (All Games at Comerica)