A Brief and Incomplete History of Follicle Folly

Share All sharing options for: A Brief and Incomplete History of Follicle Folly

From the stern mustache of Billy Martin in the 1970s to the current beaded cornrows of Neftali Feliz with too much time on his hands, hair styling and facial fashion have played a large role in the 40 years of this franchise. In fact, just this season alone we've seen the fall of the Dutchstache and rise of the Yu Darvish MacGyver mullet. When SB Nation asked us to follow-up on AJM's "Top Grooming Moments in Team History" post on Derek Holland's stalled Chevron, I couldn't help but think back on all the amazing looks that have made their way through Arlington over the years.

If you don't think the hair on the heads of the Texas Rangers matter, consider this:

Derek Holland shaved his puberty 'stache before his start against the Seattle Mariners on May 30. With the envy of Michael Cera upon Holland's face, Holland had an era of 4.05 for the season. Without his mustache for the first time in nearly a year, Holland's era ballooned to a robust and thick 5.11 after the Mariners beat the Rangers 21-8. The next time Holland took the mound with a smooth baby face, he contracted a virus that his lip tickler would have surely warded off. Holland was sapped him of his strength and landed on the disabled list where he's remained, mustache-less, ever since.

After a late May series sweep of the Blue Jays--a series before the one against the Mariners--Ian Kinsler and Josh Hamilton buzzed their hair in anticipation of an impending hot summer in Texas. The Rangers went 5-8 over their next 13 games. This stretch included the series against the Mariners and a ten game road trip to California where arcane coiffure is welcomed. The Rangers found themselves below ten games above .500 after starting the season 16-5 with free-flowing tresses.

Kinsler--nicknamed 'cabbage' for his usual curly locks--Samson'd himself to the tune of .024 drop off of his season OPS over that span. Hamilton was coming off one of the hottest months in the history of the game and lost .080 off his OPS over that span after going for a more aerodynamic look. For the Rangers, sometimes it's about style over substance. After the jump we'll take a look at some of the more memorable manes and most salacious soup strainers.

If such a thing existed, Oscar Gamble would be a first ballot inductee into the Baseball Silhouette Hall of Fame. In 1979 Gamble brought his extravagant 'fro to Texas though he only played in 64 games for the Rangers. If you were one of the lucky few to see him, plop a grandchild on your knee and tell them the tale of Oscar and the Humid Arlington Evening.

Bump Wills and Al Oliver tried to duplicate the Gamble look nearly a decade later but refused to fly so close to the sun on wings made of Aqua Net.

Jim Merritt pitched in only 31 games for the Rangers in '74 & '75 but every time he took the mound people wondered when the Rangers had signed Burt Reynolds.

They called Jim Kern 'The Great Emu." I call him the owner of the greatest neck-beard since Abe Lincoln. Brian Wilson could only dream of having a beard this good. While Wilson implored the world to fear his beard, Kern only wanted for you to cheer the beard.

Fergie Jenkins had probably the greatest season for a Texas Rangers starting pitcher ever in 1974. Would Fergie even reach the top 20 in mustaches? I don't think so. Still, his 'do is a precursor to the ones Elvis Andrus and Neftali Feliz have worn in recent seasons.

Eventually, however, Barker came to terms with his lot in life.

Lyle, like Gamble, came over as a memorable former Yankee and was only a fleeting memory. Lyle's Rangers career lasted 49 games in 1979. In all of them, however, Lyle looked like Yosemite Sam. Lyle still holds the all-time Rangers record for YS/G rate.

I haven't seen a man this depressed while also sporting such sick sideburns since Brady Anderson followed up his 50 home run 1996 season with 18 dingers in 1997.

The Rangers were blessed to have towheaded men with streaming mops manning the hot corner for decades.

Mendoza is best known for inspiring George Brett to coin the term "Mendoza Line" for folks hitting below .200. It's possible that Brett also meant a hairline covering 3/4ths of the ear. Neither of these things are something you'd want to be best known for.

I don't remember who Scott May is but his eyebrows were so nice he grew them twice.

So that's where Holland gets it.

The entire decade of the 1980s for the Texas Rangers are embodied by this single photograph of Paul Kilgus.

The 1980s ended with the dawning of a new golden era of Rangers mustaches beginning with this slickly groomed lip plumage worn by Ruben Sierra.

Look at all this face furniture!

Even Goose was drawn to the 'stache-filled 1990s Rangers to wind down his career and mustache in Texas. 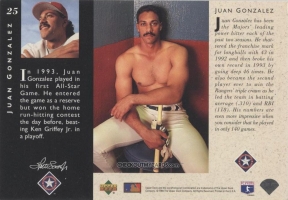 But for my money, no one could top the muzzy worn by Juan Gonzalez. Juan Gonzalez pretty much wins every category in greatest use of hair-on-head in franchise history. The Juando mullet wafting in Arlington haze is a memory that dwells within my childhood and is one of the most iconic images in the history of this franchise. If ever there is a Mount Rushmore of Rangers, I hope Gonzalez is not included simply because seeing his hair anchored forever stationary in granite would be an injustice.

No one held onto the dream of Brian Bosworth for longer than Jose Canseco.

Proof that Kevin Brown was likable!

and he was terrible.

and became the best pitcher in baseball. Beards.

Believe it or not, Koji Uehara is probably the current facial hair champion of the Rangers. Those 'burns are spectacular. Not that there's much competition. The Rangers have Scott Feldman and Josh Hamilton sporting ginger neck-beards. Mark Lowe's got some patchy sideburns. Colby Lewis runs out there with his "I forgot to shave for a couple of days and it just kind of stuck" beard. Elvis Andrus wears an on-again, off-again chinstrap. Nelson Cruz models a fussy Balbo. And then there's whatever zany antics Derek Holland is up to this week. It's not the best collection we've seen.

Although, Yorvit Torrealba is pretty meticulous in his facial hair design:

And I suppose some folks like Matt Harrison's chin curtain:

No one knows the importance of a chin-shading beard quite like Mike Napoli.

The Rangers youngsters spent the 2010 stretch run honoring their manager's look from the 1980s:

And here's what Ron Washington looks like now if he were an 8-year-old:

Yes, it sure has been a strange journey from Oscar Gamble to Li'l Ron Washington. I can't wait to see how Martin Perez's dirt squirrel fills out or if Jurickson Profar will someday sport a Franz Josef. It might look a little something like this: