Series Preview: Texas Rangers @ Seattle Mariners - You Could Use Some Baseball

Share All sharing options for: Series Preview: Texas Rangers @ Seattle Mariners - You Could Use Some Baseball

I hope you enjoyed your summer vacation. It's time to get back to work.

Every year it seems like the All-Star break can't come soon enough. It feels nice taking a break from caring about wins or losses every night. And then the break actually comes and by the end of the Home Run Derby you're checking to see when your team plays next, and what the schedule looks like in the second half, and what the schedule for the division rivals looks like. (And if you're me, you look at how likely it is that Mike Trout regresses from his Rickey Hendersonish first half. [Answer: Only barely kind of likely.])

By the time the actual All-Star Game is played, you're ready for real baseball again. But there is no real baseball for you. Not for a couple more days, at least. The cold sweats start. You get the shakes. You curse Bud Selig for making it feel like each year's All-Star break lasts longer and longer. Not that your perception of time is Bud Selig's fault. But so much is so it's easy and fun to curse Bud Selig. I don't know how we survive the winter.

Each season, at this time, you'll see an infinite amount of digital ink put to electronic paper about contenders and trades, buyers and sellers, predictions and expectations. Baseball fans can't stop themselves from talking about baseball even when there isn't any baseball to talk about. It's in our nature. We'd like to pretend that our one wish would be to see the future. But we're liars. That would spoil the greatest gift baseball has to offer us; the surprise.

If only the season were actually split in two, Texas League style. First half-winner Texas Rangers sure would sound good. But alas, you don't get any banners raised for first halves alone. No, the Rangers still have to do it the hard way.

If you want to go by recent history, the Rangers were up a game on the Angels last season at the break with a record of 51-41. By July 19, that lead would balloon to 5 games as the Rangers finished off a 12 game winning streak to begin July in Anaheim. You might remember game 13. The Rangers led 8-3 going into the 6th inning before allowing six runs in the bottom of the inning to lose 9-8. A near certain 6 game lead became 4. By the next day, it became 3. Shots were fired. Adrian Beltre then got a flat tire for a month and by mid-August, the lead was back down to 1 game.

The Rangers, of course, would win the division. But not before the lead would wax to a season-high 7 games by the end of August only to wane to a measly 1.5 games by mid-September. The Rangers and Angels were heavyweight prize fighters last season. The Rangers just had more in the tank for that final round and the blows finally landed.

In 2010, the Rangers went into the break with a 50-38 record but they had just been swept in a four game series at The Ballpark at the hands of the woeful Baltimore Orioles. Cliff Lee was dressed in Ranger white. Bud Selig and bankruptcy courts were the owner of the team. And the Rangers had a 4.5 game lead over the Angels. Needless to say, it was a weird time.

The Rangers lost the third game coming out of the break in Boston and saw the lead shrink to 3.5 games. That 3.5 game mark would be the lowest it would remain over the course of the rest of the season. By mid-August the lead was 8.5 games and the Rangers were on their way to winning their first division title since 1999.

There was also 2009. The Rangers trailed at the break that season by 1.5 games and sported a 48-39 record. That season was probably the most fun I've ever had being frustrated. The Rangers actually held the lead two days before the All-Star break. They would not lead again. The closest they got after July was a 3.5 game deficit on August 9. On that day, Derek Holland shut the Angels out on three hits. It felt like it could happen. Two weeks later the Angels led by 5.5 games and the Rangers faded down the stretch.

So how will it play out in 2012? Will the Rangers and Angels trade blows more in line with what they did mid-summer last season or will we see the Rangers run away with it like they did in 2010? Heaven forbid its Angels from pulling a 2009. The best thing is we get to watch it all unfold starting tonight. It's been too long since we've had a baseball game.

Here's a breakdown of the pitching match-ups for this series against the Seatown Seamen:

Advantage: We've now had half a season to realize that Kevin Millwood is having a pretty nice season thanks in part to pitching in Safeco in front of a good Mariners defense over surely Derek Holland is better than Kevin Millwood, right?

Advantage: Felix Hernandez is still the King over surely Yu Darvish can get Ichiro out this time, right?

Advantage: Matt Harrison in Are You Terrified Yet? over Hisashi Iwakuma is no Yu Darvish. 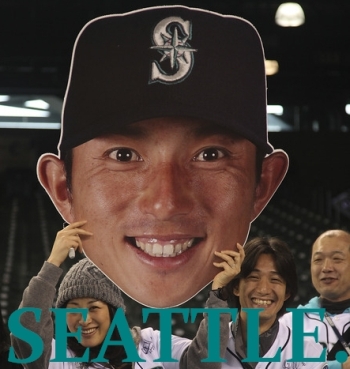