After playing a taxing three game series in Seattle, days after spending half a week off in Kansas City, the Rangers got some much needed rest yesterday before beginning this two-game series against the Oakland A's. After this grueling two-gamer, the Rangers will get another day off. Perhaps the scheduling wizards foresaw the injury bug hitting the Rangers in June or they used there soothsaying abilities to realize the team's bats would cool off in July. Whatever the case, maybe the schedule weirdness isn't so much weird as it is prescient. Or maybe it's just weird. It's pretty weird.

Of course, the dismissive wank joke would be, "The Rangers wouldn't want to spend more than two days in Oakland anyway." Because, you know, crime and stuff. But it might be true anyway. The A's are entrenching themselves into the role of one of baseball 2012's all important "surprise" teams.

In fact, if the season ended today, the A's would firstly wonder why Detroit got to play one more game than them; but then they would notice how they are virtually tied with the those Tigers, along with the Indians and Orioles, for the right to play a one-game playoff play-in game with the Angels. No amount of prescience could have predicted that. I mean, the season ending after 89 games? Madness. The baseball playoffs being silly and convoluted? Oh, I guess everyone but Bud Selig could have predicted that.

Nevertheless, going to Oakland isn't just a pit stop for wins and getting to hang out in San Francisco anymore. Heck, the last time the Rangers visited Oakland they were nearly no-hit, beaten by Bartolo Colon in barely two hours flat, and only squeezed out a lone win in the four game series the same night Derek Holland caught shoulder flu.

The A's are a winning baseball team so far this season both overall (46-43) and at the Coliseum (24-20). The A's are 9-1 in the month of July. It's not the cakewalk it was supposed to be. The Rangers are only 5-5 against the A's this season. As much as we've turned out eye to the impending A.L. West showdown with the Angels, the A's are only 2.5 games worse than the Angels at this point in the season. We may not fear the A's, but they're not a pushover.

The A's are winning with a very solid pitching staff built around a forgiving ballpark and supportive defense. It probably also helps that the A's are hitting better than worst in baseball. Hopefully the Rangers are enjoying their extended time of leisure while mindful that Oakland is currently not a place for the American League to send "Wish You Were Here" postcards.

Here's a breakdown of the pitching match-ups for this series against the suddenly really hot Oakland A's:

Advantage: Of course there was no way Colby Lewis would miss a start in Oakland over surely the Rangers can hit Travis Blackley eventually. 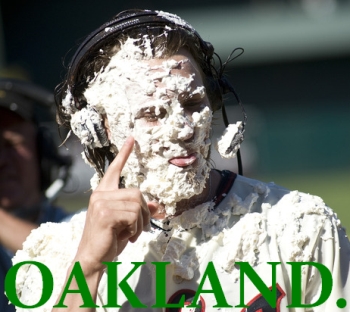