The Rangers have built a six game lead in the American League West. The Angels want to reduce that lead and attempt to overtake the Rangers to win the division with a remaining 70 or so games on the schedule. That's the stakes for a weekend series of baseball in California. The emotion for you, the Texas Rangers fan, is that this is the Angels. We're the new Yankees/Red Sox, after all. (Though, this brings up a good point. Which one of us is the Yankees and which one of us is the Red Sox in this simile? I'd like to say the Angels are the Red Sox in this scenario because I know how much Angels fans hate the Red Sox. But then that makes us the Yankees and that's not very much fun. Except for all of the winning. That's a trait to admire about the Yankees when you're in first place.)

This is what we've been told all winter. The new superpowers of baseball reside in the West. It took a little time, and a gauche-filled beginning of the season, for a race to develop. But the Angels are who we thought they were. This is assuming, of course, that you also thought the Angels weren't better than the Rangers but were a good baseball team capable of winning. That's who I thought they were and that seems to be true. Since May, the Angels have gone 42-28 and that includes a current 7-8 July. Over that same span, the Rangers have gone 38-30. Perhaps we'll eventually see that being gauche meant everything. What happened in April will still be tallied in the standings come that final regular season series in October.

All the mind games are there. Jon Daniels sends a scout to watch a potential target, Jerry Dipoto insists the Angels aren't looking to move Peter Bourjos. Dipoto mentions that his team is doing their due diligence on the starting pitching market, Daniels vaguely references that the Rangers are possibly already over-budget. Who blinks?

The way these teams are set up now and for the future--with strong Major League rosters and fresh, awe-inspiring revenue streams, it's going to be a baseball Cold War filled with intrigue for years. We've only begun to scratch the surface on disliking the Anaheim Angels, I feel. And that's with a six game lead.

For a weekend of baseball, however, here's basically all you need to know:

Here's a breakdown of the pitching match-ups against the don't look now but the A's are only 1.5 games behind them Angels:

Advantage: Jered Weaver always 2010 Trevor Cahill's to the extreme. But we just have to stop questioning it; he's just beyond peripherals. Jered Weaver bends pitching-reality to his will over Derek Holland has the ability to shut a team down or make a bad fart joke. It usually is one of those two things.

Advantage: Yu Darvish isn't pitching against the Mariners so it'll be okay over holy cow Ervin Santana has been a bag of nothing.

Advantage: Matt Harrison and Trapped in Bat Wing Hall over Dan Haren might start this game or Garrett Richards might. Believe it or not, I might prefer to see Haren start. 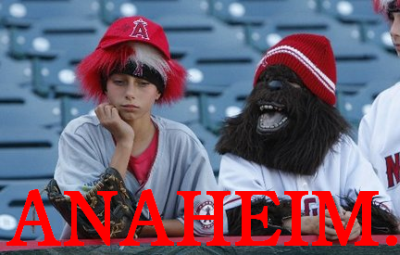