You know, for all the doom and gloom surrounding our behind-the-Yankees-by-percentage-points-for-best-record-in-the-American-League Texas Rangers, in putting together the numbers for this preview, the Rangers have been, and still are, a better team than the Anaheim Angels. It's pretty shocking, I know. I thought the Angels had surely passed the Rangers by now. Turns out, it was the A's passing the Angels.

Oh sure, since June or so the Angels have been putting on a charge. But they have been doing so at a pace only barely above the level that the Rangers have been playing since then. And you know why? The Angels are a good baseball team. It hurts to type those words, but it's true. We knew they were going to be good and they are. The A's? Well that's just weird.

I don't think these Angels are better than the Rangers. Not with Zack Greinke. Not with Vernon Wells. Not with Mike Trout. Not yet. Probably not for the rest of 2012. Five game leads in exceptionally late July are a pretty big deal. Maybe they eventually do overtake the Rangers, though. A five game lead is a great thing to have, but it's not an impossibility that the Angels continue to tick upward enough while the Rangers somehow extend their recent stalling out for an extended period of time.

I had come to terms with the notion that the Rangers were likely going to stand pat at this deadline after missing out on Cole Hamels and Grienke. Let's just say some recent rumors have altered my deadline expectations. Perhaps to my own detriment, but so be it.

I'm too distracted by Cliff Lee rumors to really finish any of these thoughts. Maybe that says a lot about my level of concern regarding the Angels. Anyhow, here's basically all you need to know:

Here's a breakdown of the pitching match-ups against the third place Anaheim Angels:

Advantage: Roy Oswalt's bad back but vaguely promising peripherals over Ervin Santana and the 15-out Pitch Limit.

Advantage: I assume that Jered Weaver will win every game he pitches over Derek Holland looked pretty good last time out.

Advantage: Did you know Yu Darvish has .1 higher RAR and the same WAR as Jered Weaver this season over hopefully the Rangers can derail this notion that Dan Haren is back. (Garrett Richards or Jerome Williams)

Advantage: Matt Harrison in Stay Out of the Basement over it's amazing to me how similar C.J. Wilson and Yu Darvish's seasons are going. 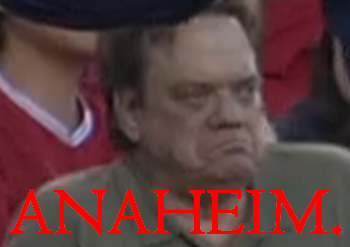