I'm a TV guy. When it comes to baseball, I've always been a TV guy. A part of me is mournful that I never really found baseball through the AM dial. I am fairly jealous of those that did simply because the description of the game on the radio is so much more defined. I love having a picture painted for me. But I found the Rangers on HSE with Greg Lucas and Norm Hitzges. I just like watching baseball. I connect from letting my eyes paint the picture for myself.

When my family would visit relatives in Mesquite, I would sometimes catch mythical games called by Steve Busby and Jim Sundberg on local television. Later the Texas Ranger experience was brought to me by Tom Grieve and Mark Holtz. Even though I loved the pairing, I enjoyed those telecasts less than I now realize I probably should have and for less time than our world deserved. Bill Jones came along for a spell after Holtz passed. Before too long it was TAG and Josh Lewin. That was the golden era for me.

That's not the golden era for many Rangers fans, though. For many, it was probably the decade or more when Rangers baseball was broadcast to their ears by Eric Nadel and Mark Holtz. Of all the people who have spoken a word of Rangers baseball--from Don Drysdale to Jim Knox--Nadel and Holtz are most synonymous with talking to us about the game of baseball. And with good reason. My limited time with Holtz was a revelation after seasons of what I know now to be the unlikely pairing of Hitzges and game-calling. "Hello win column!" still echoes even has the reverberation became "Ballgame!"

But it is Nadel that is a treasure. Even if I didn't tune in as often as I should have, it was easy to recognize. One of my prized possessions growing up was Nadel's 'The Texas Rangers: The Authorized History' book. A whole book on the Rangers! I couldn't believe it. I've probably read through that book at least a hundred times. I appreciate that book more than the majority of things I've ever owned. My memories of Nadel as a broadcaster likely differ from most. I will tell of my two best memories, pre-2010 ALCS, from Nadel:

1. In 1997 I lived for a spell in Toledo Bend, Louisiana at a lake camp far away from most anything. On clear nights, I could get a signal just strong enough to catch a couple of innings of Nadel's call of a Texas Rangers game. On one night, early into a season after the Rangers had finally made the postseason, I caught Nadel call Marc Sagmoen's inside-the-park home run against the Royals in Kansas City in a Rangers win. I'm not entirely sure why I remember this so vividly. It was a rather meaningless April win in a rather unforgettable season. But the inside-the-parker was such a rare beast and Nadel captured it beautifully and here I am 15 summers later still thinking about it.

2. In 1998 my sister was watching 'Buffy The Vampire Slayer' on our only television so I was in my room listening to Nadel call what felt at the time like the biggest regular season game in franchise history. It was Sept. 16 and the Rangers had spent most of the second half of the season in second place behind the Angels. This was the first taste of what would become a rivalry a decade later. The Angels came to town for a two game series up one game in the West. They left town down a game in the West as the Rangers swept the two games and never looked back. The Rangers would reach the postseason for the second time in franchise history that season. But I'll never forget Nadel's call of the top of the 9th inning of that first game.

John Wetteland was known for being a shutdown closer but also had a history of making sure it was interesting before he did the locking up. On this night, he allowed a man to reach on a wild pitch strikeout and then served up a two-run homerun in a 5-1 game. After a two-out single to Gary Disarcina, he got Gregg Jefferies (who had homered earlier in the game) to pop out to Rusty Greer. Nadel's call and the sound of the electricity of the crowd still stays with me. It was a sound from those late 90s teams that wouldn't return to the Ballpark for over a decade.

Over the years, as MLB has come so far in its online multimedia presence, one of my favorite things to do after a important moment in a Rangers game is to go back and listen to Eric Nadel's call. Thankfully, we will always have this call. This is simply Eric Nadel's best (:20 mark):

"Strike three called!" I dare you to not get goosebumps.

The Rangers will honor Nadel on Saturday by inducting him into the team's Hall of Fame. He will be honored along with a collection of former Rangers comprising the 40th Anniversary Texas Rangers team. I really can't think of anyone more worthy of being honored, while standing before the eyes and ears of the very best that have been a part of this organization, than the voice of the Texas Rangers. This man is history.

Here's a breakdown of the pitching match-ups against the a potential October foe once more in the Detroit Tigers:

Advantage: Max Scherzer is weird. He's striking out everyone ever but has full season career highs in LD% and HR/FB%, an insane .353 BABIP which is high because of the LD% and a career low in GB%, and is also walking folks more along the rate around his first full season in the bigs than last season's 2.5/9 rate. And yet, he's still really good because he can strike people out at a nearly Strasburgian rate over say, what if Scott Feldman ends up being the October Colby Lewis?

Advantage: There's not a good enough Derek Holland on the good Derek Holland spectrum that would lead me to assume he has any sort of advantage over Justin Verlander in the perspective of one game being played in the 2012 baseball season. I wonder how many baseball writers will simply look at Jered Weaver's win/loss record and vote him the American League Cy Young winner without considering just how amazing Verlander has been again this season.

Advantage: So this is what it has come to? This is the world we live in? This is a world where Rick Porcello is possibly statistically nearly as good as Yu Darvish given two-thirds of an entire season? I'll still take Darvish in this game but I'm not happy about this. 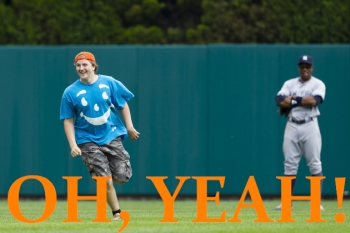