If you look at the chart after the jump, the Orioles might be one of the worst teams the Rangers have faced in months statistically. At least the Twins can hit a little. At least the Royals have had fantastic bullpen numbers all season. The Orioles are 33 runs below replacement level overall as a team totaled up from the categories of batting, base running, their three starters throwing in this series, bullpen, and defense measured by UZR. The Orioles, by many measures, are simply not very good.

Either this thing turns into a pumpkin like we've all been expecting, or we're running into one of the more unusual seasons from an individual team that I can remember. Perhaps the only other team that I can remember in recent history having this much success without having very much success would be the 2007 Arizona Diamondbacks who won the N.L. West, and 90 games, despite being outscored by 20 runs over the course of the season. Even the 2004 Texas Rangers never had it this good.

But it can be fun. The Angels of Anaheim are 4.5 games back of the Orioles for a spot in the postseason. Sort it by run differential, and the Orioles would trail the Angels by 6.5 games. The Angels rank in the top five by RAR in batting, base running, and defense. In any given series, the Angels would own a statistical edge in starting pitching over the Orioles. The only upper-hand the Orioles would have is in the bullpens. I like to think Darren O'Day and Pedro Strop are making all the difference.

Were the season to have ended yesterday, the Orioles would be gearing up to face the Tampa Bay Rays in the Wild Card play-in game. Those Rays--only ahead by a game on the Orioles in the standings--have a Pythag record of 68-53 and that would give them a 12 game advantage over the Orioles were baseball ruled by logic and order. But it is not; not always at least. The Orioles continue to get beat every night in every measurable way and yet somehow come out with a win more often than not in this 2012 season.

Here's a breakdown of the pitching match-ups against the Rangers East Baltimore Orioles:

Advantage: Ryan Dempster not needing a Texas passport over Miguel Gonzalez has done a good job in his last few starts at not allowing runs but boy has he been lucky.

Advantage: It's a battle of the unholy strand rates. I'll take Scott Feldman over Chris Tillman simply because Feldman has pitched better for longer this season but these two have had similar seasons. Also, Tillmania works nearly as well as Feldmania. 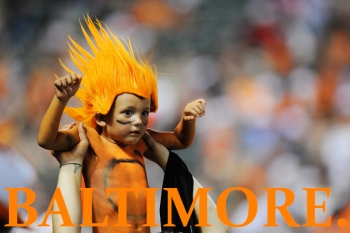 Rangers Record vs. Baltimore: 3-1 (All at Camden Yards)