With the Rays shuttled out of Florida by the hot air of the Republican Party and the stiff winds of Tropical Storm Isaac, they will find no reprieve in Texas. The Rangers are hitting again. But they've been hitting against the likes of the Blue Jays, Orioles, and Twins. This series should be a nice test for both teams. The Rays' starters are as good as advertised and their bullpen is one of the best in the league.

David Price will probably win the Cy Young award if he doesn't crater in the final month of the season. James Shields is having a bit of a down year--but not a bad year--and has a change-up that always seems to fool the Rangers (Except in October). Alex Cobb goes on Wednesday and is their #5 starter coming off a complete game shutout of the A's. The riches are embarrassing for the Rays in the rotation. Though, I have my doubts that they're all that embarrassed about it.

The Rangers counter with probably their top three starters in Derek Holland, Yu Darvish, and Matt Harrison (in the order that they will pitch in this series). So, at least the Rangers will be putting their best foot forward against a team that is getting hot when getting hot is good. It seems inevitable now, as we near September, that these teams are on a collision course for another postseason battle. It wasn't long ago that it didn't seem that way at all, though. The Rays were rumored to be sellers at the deadline. James Shields was heading to Anaheim. Ben Zobrist was hugging teammates in the dugout. B.J. Upton was in his millionth rumored deal.

But the Rays held firm. And with good reason. The Rays are good. We all expected that they would be. Really though, they just did what the Rays do; they hung around in the tough A.L. East all summer and hit the afterburners as we reached August. Now the Rays lead the first Wild Card spot and trail the Yankees in the East by only four games. It just feels like they'll make it. And if they do, they've got David Price in their back pocket for any team that wants to play them for the right to play a postseason series. And if they win that, before October is up, they'll hear from the Rangers again. That's just how Octobers go.

We know all about inevitability. In 1996-1999, it felt like no matter what the Rangers did, they were destined to face the New York Yankees in the playoffs. Sometimes these things are unavoidable. For the Rays, there may be no escape.

Here's a breakdown of the pitching match-ups against the postseason memory factory Tampa Bay Rays:

Advantage: It is said that Derek Holland has a chance to match any pitcher on any given day because he has David Price-esque stuff. Well, he did it once this month against Justin Verlander. Now he's got to do it against Price himself having a potential Cy Young season.

Advantage: Quad tightness caused Yu Darvish to miss a start in the Twins series. Darvish had strung together a couple of solid starts after struggling for a month. The last time Darvish was skipped he came back and had probably his worst start as a big leaguer in Seattle. James Shields is still a Ray. James Shields is still good. James Shields has a history of being tough on the Rangers in every month that isn't October.

Advantage: FIP and xFIP continues to not like Matt Harrison and The Werewolf in the Living Room but he continues to go out there and throw seven or eight innings of two or three run ball with five Ks over FIP and xFIP like Alex Cobb but he has the ability to lay an egg like the start he had a little over a week ago in Anaheim. 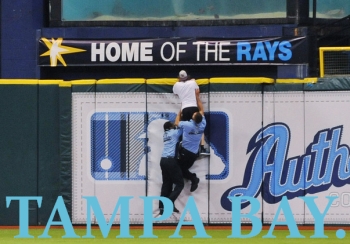 Rangers Record vs. Tampa Bay: 1-2 (All at The Ballpark)