In Joey Matschulat's recent article about yesterday's stupid game on BBTiA, he had this note regarding a discussion with Jason Cole of LoneStarDugout.com:

Jason Cole and I engaged in a little back-and-forth exchange on Holland, and he mentioned that Holland really needs to have that steady 94-95 mph 'oomph' on his fastball to mask his secondary-pitch defiencies; as it is, Holland averaged a little less than 93 mph with his heater against the Royals, and maxed out at just 94.4 mph, which becomes a bit more alarming when you consider that (a) he averaged 94.4 mph (or better) with regularity late last year, (b) the Royals' Pitch f/x setup seems to run a bit hot, meaning that Kauffman Stadium may have actually been generous as far as his fastball velocity was concerned, and (c) his command seems to dangerously ebb and flow from one inning (or batter) more often in 2012 than it did a year ago.

From my review of Holland's pitch selection last year, I speculated that the increased usage of his fastball, far and away his best pitch by weighted values, was potentially a key part of his success in the second half of the season. In looking at Derek's average velocity game-by-game for his career, I would amend that further to speculate that his fastball is his best pitch when he throw's really hard. 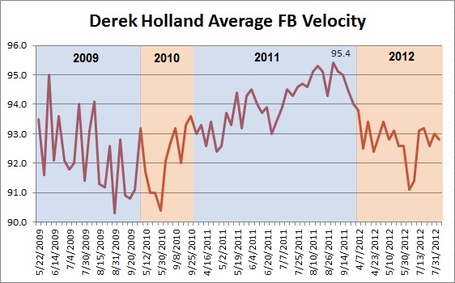 The above graph shows Holland's game-by-game in games as a starting pitcher (all reliever appearances removed) and you can easily see his velocity steadily climb as the season progressed. In the first half of 2011 his average velocity was 93.5, but in the second half it was 94.7. The period where Derek Holland was his most effective in his entire career coincided with the period where he threw the hardest.

What we know about Derek Holland as a pitcher, from both looking at the weighted values and results from scouting comments like Jason Cole's, is that he relies on his fastball to be effective. His curveball and change up are both below average pitches that don't generate many swings and misses and when hit, are often hit hard. He needs them to keep hitters from sitting on his fastball. His slider is a swing and miss pitch, but he needs to be ahead in the count to force hitters to chase it. That's why throwing his fastball strikes, as it is for every pitcher [looking at you, Yu], is critical. But since Holland has shaky command those extra miles per hour seem to be just as critical to keep his mistakes from getting killed.

In 2012, his average fastball velocity (note that Pitch F/X is now classifying it as a sinker, but its movement, spin and release are what his four seam fastball has been for his career), is at 92.8 MPH, but this diminished velocity doesn't seem to be an aberration. By year his fastball has been 92.5, 92.1, 94.1, 92.8. And as noted before, during his ineffective first half, his velocity was only 93.5. Something magical seemed to happen for Derek in the second half of 2011, but a large part of it (and I'm speculating here) may have simply been throwing harder.

For the future I find that thought very concerning. If Holland was going something close to max effort to sit at almost 95 MPH regularly then it may not be something either he or the coaching staff feel comfortable continuing. If it was a mechanical adjustment, perhaps he can find that groove again, but either way he has been unable to find that kind of velocity again and we're left wondering if he'll have that kind of sustained velocity again. Without that extra velocity, I think Holland will need to truly improve his command and/or secondary pitches to be something more than the 1.5-2.5 win pitcher he's looked like outside of the second half of 2011.