Yesterday wasn't much fun in Texas Rangersland. The Rangers essentially gave a game away to the Royals--The Royals!--that they had every opportunity to win. But if you watch baseball long enough, you begin to recognize when things might not go your team's way. Yesterday's game had the stink of a loss wafting throughout. There was time to steel ourselves for such a result. Therefore, while annoyed and disappointed with a game the Rangers easily could have proved my sports intuition wrong about, I wasn't terribly disheartened because I sort of got the sense a win wasn't in the cards by the middle innings. A rare pessimistic turn, for sure. But something felt off.

This runs exactly counter to a game played on July 24 2012 that made me really mad at baseball. It wasn't too long ago that these two teams were going at it in Arlington in a low-scoring (I don't miss you, July) affair. It was Martin Perez's final start and he pitched solidly in a game I thought going in that he would get brutally trounced.

I like Marteen. I am supremely glad he wasn't dealt at the deadline for a rental. The Rangers are going to need him in the rotation next season. He's going to be good. But before Boston, he had two career big league starts. Those starts came against Oakland and Minnesota. Needless to say, those are not great offensive teams. I have seen Perez fall apart in the first inning against the likes of the New Orleans Zephyrs. This was a real big league offense. I fretted. I worried.

So Martin Perez throws six innings of five hit baseball and allows a 4th inning run only when David Murphy misplayed a two-out Kelly Shoppach double hit toward an unfamiliar right field. After Perez put up a final zero in the top of the 6th, the score was 1-0 Boston with Clay Buchholz doing what any pitcher in baseball could do to the Rangers in July. But then the Rangers got to Buchholz in the bottom of the inning for a lone run and I was certain the Rangers were going to win. I don't know why.

Maybe it was because I thought cosmic baseball justice would reward Martin Perez for pitching well against decent hitting baseball team. Maybe it was because the Rangers just don't lose to Boston in recent years (22-10 since 2009 up to that game). Whatever it was. I thought the Rangers would pull this one out. Instead, they never really came close and lost in a way that made me more upset at any baseball game since a certain baseball game that happened nine months ago. It was like a child conceived through contempt for the game of baseball had slithered out of me nine months later.

After tying the game in the 6th, the Rangers collected only one additional hit over the course of the rest of the game. That was a one-out single by Elvis Andrus in the 8th inning off of Vicente Padilla. Elvis was picked off first but advanced to third on a throwing error by Padilla. Josh Hamilton struck out like Josh Hamilton did in every plate appearance in July 2012. That left it up to Adrian Beltre. Only, with first base open, many assumed Padilla would walk Beltre and face a slumping Michael Young. Padilla took the Padilla route to that result and hit Beltre in the head with a fastball. Michael Young grounded out weakly to shortstop (Baseball-Reference's emphasis, not mine) like Michael Young did in every plate appearance in July 2012.

I was dilated to a full 10 centimeters of livid already. Everything about that sequence of events disgusted me and I was ready to push this hate baby out of me. Joe Nathan delivered the spiteful offspring by allowing two two-out walks and a 3-2 pitch bloop that floated disdainfully over the glove of a mistimed Andrus leap at shortstop. The Rangers didn't bother to threaten in the 9th. Padilla was the winning pitcher. An injustice was swaddled and placed directly into my despondent arms. I was not ready to parent this feeling of certainty lost.

I can't say I really have beef with the Red Sox, after the Rangers have spent their best years using them for springboard victories, but I want Vicente Padilla to pay for his war crimes. I want the Rangers to avenge this particular loss somehow. I never want to feel gun-shy about feeling a win coming on. But when I do and it doesn't, I might think of that July 24 game.

Here's a breakdown of the pitching match-ups against the below .500 Boston Red Sox:

Advantage: Yu Darvish having four strikeouts in his last four innings pitched over Aaron Cook having four strikeouts on the entire season. And you thought Matt Harrison's strikeout rate was bad. Cook has K'd four batters in 44.2 innings this season. Though, he's also only walked four batters in 44.2 innings this season. Aaron Cook really believes in pitching to contact.

Advantage: Ryan Dempster with an American League game under his belt over I don't know why Jon Lester stopped being an ace.

Advantage: Matt Harrison in Revenge R Us over it's sort of amazing that Beckett is the only starter to allow fewer than a double digit amount of runs in his last three starts. Of course, Beckett allowed nine runs and his last start lasted 1 2/3 innings. Dog days, indeed. 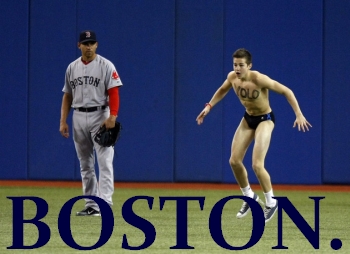