We're living in the future.

T.R. Sullivan has a 2013 Year in Preview article with ten questions concerning the Rangers ranging from who would currently be the team's fifth starter (At this moment: Martin Perez, perhaps) to are the Rangers still a contender (Yes) and everywhere in between.

Gil LeBreton has some fun and predicts events for the DFW sports scene for 2013. Among the moments foreseen for the Rangers are: A trade for Justin Upton, an extension for Elvis Andrus in May, a trade for David Price mid-season, an AL West division title, and a loss Game 7 of the 2013 World Series to Zack Greinke and the Los Angeles Dodgers.

I could live with most of that.

Richard Durrett's 2013 Rangers Resolutions series continues this morning with today's focus being on how the Rangers need to improve their baserunning in the upcoming season.

Tom Wilson of the Newark Advocate interviews Derek Holland for a piece on how Holland is looking to rebound from a subpar 2012. In the article, Holland expresses how he feels like he is his own worst critic which makes me realize that he's never visited Lone Star Ball.

Lastly, what do you say, JD? 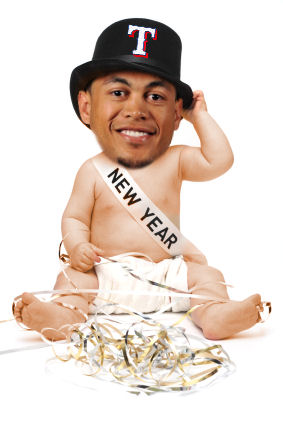 Let's ring in the New Year in style.