The 2014 offseason: Now with fun activities!

I've whittled down Yahoo! Sports' Jeff Passan's top 200 free-agent ranking tracker to a more manageable top 40 and will now predict where each player will sign to play baseball in 2014.

Because I am only going to predict the top 40 players listed, we'll just have to assume the likes of No. 174. Taylor Teagarden, No. 159. Munenori Kawasaki, and No. 89. Nick Punto just stop existing entirely.

(Pre-P.S. I actually hope the Rangers sign Kawasaki because I love a quirky Asian.)

Where else is he going to go? The Yankees have money to spend and they can't afford to lose their best player. The only alternative is some team like Detroit or Washington goes winter Anaheim Angels on Cano and the Yankees trade for Ian Kinsler or Brandon Phillips while signing every free agent pitcher.

It would be kind of awesome if this were the Mystery Team entrant of this offseason. If only for the chaos.

Remember when the rumors made it feel like it was inevitable that Yu Darvish was going to go to the Blue Jays? The posting process to acquire Japanese talent is always flush with intrigue and mystery. And, unless the rules are changed to allow Tanaka his choice of team (which is possible), I could see a surprise team like Toronto (or possibly the Cubs) actually making that bid that they now wish they had made on Darvish.

If Tanaka is ultimately allowed to choose his suitor, well, he's probably going to the Dodgers or the Yankees or the Giants because why wouldn't he?

Jon Heyman, a scout, and a GM walk into a bar, get snockered, and say some team is going to sign Shin-Soo Choo to a $110 mil, or more, contract. The punchline is legitimately a painful blow to the face and wallet regions. This sort of thing is just so Mets.

Alternatively, I could see the Tigers signing Choo because this is also a very Tigers thing to do only for very different reasons. 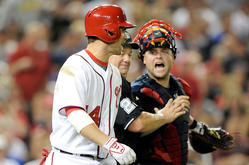 Should the Rangers sign Brian McCann if the contract is 5 years, $80 million?

How could McCann say no to the Red Sox, though? They just won the World Series, they're C.J. Wilsoning Jarrod Saltalamacchia right now so the need at catcher is there, they have the money, and McCann already has the beard. In free agency, everything is coming up Cherington these days. My guess is that'll include McCann as well.

I really hate the obvious because the obvious so rarely happens in free agency, but the Mariners have been trying to give money away to free agent position players for a decade now. Someone is eventually going to take it. Seattle's post-90s Griffey Safeco era has been marked by its search for offense in a similar way to the Rangers desperation for pitching during The Ballpark era.

Maybe Ellsbury is the stars aligning for Seattle. He's a guy from the Pacific Northwest, would fill a position of need on the M's, and he'll benefit monetarily from the Seattle front office dealing with the urgent desire to attain something resembling respectability next season. This all screams Ellsbury. That is an awkward thing to scream.

After the Rangers miss out on McCann, Choo, Nelson Cruz, and others, they grab an aging, veteran switch-hitting DH candidate from the Cardinals to insert into the top of the lineup. If this sounds vaguely familiar, I'm sorry that you're now vomiting.

The years/dollars could have us grabbing for the Dramamine as the Rangers will likely have to beat out the Yankees and Cardinals to sign Beltran. Nevertheless, Beltran should be productive while forming the Beltran to Beltre connection for a couple of years.

I believe, at this moment, the Yankees' rotation consists of CC Sabathia, David Phelps, Don Zimmer, A Derek Jeter Gold Glove, and CC Sabathia's neck wattle. The Yankees are likely going to gamble on a free agent starter or two. If last season's second half is any indication, taking a chance on Ubaldo Jimenez might not be a bad idea. Though it'll likely mean paying Edwin Jackson money for someone who was among the worst starters in the American League half a season ago.

However, if you get anything resembling '09/'10 Ubaldo or '13 second half Ubaldo, that's a steal.

Kuroda takes his splitter and goes home. Later we find out he was actually Masahiro Tanaka all along. (Or he re-ups with the Yankees.)

Mike Napoli, after winning the World Series, was photographed shirtless, rolled cig in hand, unceremoniously having a one-man party while walking the streets of Boston in the middle of the night. Mike Napoli isn't going anywhere. Mike Napoli is Boston.

I wish the Yankees would sign Santana. Could you imagine Santana at New Yankee Stadium with the short porch for an entire season? It would be great. Instead, I think the Orioles will spend some money on their rotation even if it means paying Anibal Sanchez money for a guy who was maybe the worst starter in the American League just two seasons ago.

He's from Chicago. They're apparently interested. The Mets will have already chewed through their budget on Choo. This makes sense to me.

The Indians were the 2013 American League Cinderellas that got to play in one "playoff" game. Just like Bud Selig drew it up! It was very exciting for people who miss the good ol' days when men were men and Jim Thome was an Indian. Cleveland won't want to test the Plexiglass Principle too much so they reunite with an old friend to replace Jimenez.

It would be nice to see Colon take his perplexing Cy Young-ish career years in his late 60s to the AL Central and away from the direct competition.

Are you ready for this to happen? Because it's going to happen.

Reliable Joe seems destined for Detroit and I wouldn't be surprised if it came together quickly.

The Orioles loosen the purse strings a little more to sign an underrated up-the-middle player who solves a need at second base.

Burrnett has claimed that he'll either sign with the Pirates or retire. The last time I recall hearing about a player being offered tens of millions of dollars to not retire, he took it. I suspect Burnett will do the same.

I feel like the Phillies will do something zany to solve their desire for an outfielder with power -- like trade for Matt Kemp or something. However, if they stick to their current strategy of showing no foresight while throwing money at veterans to solve problems, they'll be the team that gives Nellie that crazy four year, $64 mil deal Jon Heyman predicted.

Jhonny Peralta is going to become a New York City legend when he replaces Alex Rodriguez at third base in 2014 and then becomes the man to replace Derek Jeter as the Yankees' shortstop in 2015. Remember when that person was going to be Elvis Andrus?

Look kids, the Astros are trying. Isn't that adorable?

Morales getting QO'd might have killed some of his value. Sure, it sounds about as fun and exciting as breaking your leg while celebrating a walk-off home run, but I wouldn't be surprised if Morales accepts the qualifying offer from the Mariners and tries the whole free agency thing again next offseason.

It seems strange but the SF Giants team that recently smothered teams in the postseason with excellent starting pitching is now incredibly short on quality starter depth. Ricky Nolasco seems like the perfect No. 4 type to have a few career years at AT&T Park during the next round of baffling San Francisco World Series championships.

I envision Hudson doing a Colby Lewis-esque make-good deal with the Braves after missing half of last season with a freak ankle fracture. I envision that going about as well as Colby Lewis' 2013.

Salty pouts after accidentally mixing his red socks in with the whites.

He's going to be revitalized in 2014 and put up a full-season OPS of .850 because that's what happens to players who play first base for the Rays.

The Rangers are never trading Jurickson Profar for Oscar Taveras now. Thanks, jerks.

The Cubs are among a slew of teams that need bullpen help. Benoit has that closer stank on him now but he's obviously had success as a set-up man as well.

The Mets could use a starter or two. Bronson Arroyo could use some hip places to jam out with his rock band. This would be a nice marriage to get the Mets through their Matt Harvey-less year in perdition.

This seems like a smart flier to take for a team like the Royals. If you get a healthy year from Johnson, you've got a guy who likely replaces what Ervin Santana gave you in 2013 and maybe then some. If he isn't healthy, you're the Royals, so who cares?

Chris "Ryin" Perez will be moving on so I'd imagine the Indians won't mind upgrading with Rodney on a short deal as they probably want to try to make the actual playoffs next year.

I remembered today that Carlos Ruiz's nickname is "Chooch". That is all.

This will be just dreadful. Just awful.

Yep. I hate it already.

Brian Wilson forced to shear the beard because of archaic Yankee team policy will be the story of the spring. I can't even mentally picture what he'll look like under there anymore. It's going to be amazing.

(I'll admit, this prediction is based more on desire than actual logic. Though, the Yankees will seek relief help.)

Unsurprisingly, because this is the Twins, Suk-Min Yoon turns out to be a white guy from Wisconsin who looks just like Brad Radke.

After Kazmir turned his career around in Cleveland, I could see a team like the Cubs come calling. Kazmir would help stabilize the Cubs' rotation while not requiring a monster deal. Eventually the Cubs could use Kazmir as a trade piece to continue stockpiling talent.

Seriously, Passan? Fat Grandpa Berkman is a better bet to help a team than Jason Vargas or Outfield Chris Young? Nevertheless, his healthy .875 OPS season with the A's is going to sting.

Did you know that Juan Uribe had a fWAR of 5.1 last season for the Dodgers? That's obviously not going to happen again but I could see the Cubs giving Uribe a couple of years to produce admirably while they work their way toward respectability.

That's what teams do, right? They don't actively and willfully tank their seasons to draft Mark Appels and Carlos Rodons, right?

I have equally violent reactions to anyone who played on the 2011 St. Louis Cardinals or anyone who plays for the Oakland A's. I'm making fists with my hands involuntarily. ("Involuntarily" is difficult to type out with fist-hands.)

So there you have it. The top 40 free agents listed, SEO optimized, and, thanks to my cogent crystal ball, sorted by where I think they will be playing baseball next season. Take a vacation, baseball GMs. I've done the work for you.

Feel free to debate my wizardly powers of prognostication, make your own predictions, and/or bookmark this to look back at in March so we can laugh about that time I pretended to know who Suk-Min Yoon was.