There's not a ton going on right now as we wait for the Choo shoe to drop.

I'm pretty sure JD could get the Oakland Raiders back to the playoffs if given a couple of years.

Jeff Wilson writes that the Moneypenis remains turgid but restrained.

David Schoenfield predicts ten things he sees happening before the end of the offseason. Because this is the offseason of nonstop AL West improvement, five of the ten moves involve West combatants.

In an ESPN Insider piece, Jim Bowden grades all of the AL teams on their offseasons thus far. Bowden gives the Rangers a B+, which is higher than just two AL teams. Unfortunately, the teams with grades higher than Texas are the A's and Angels.

If you're interested in having your computer explode, Fangraph's Mississippi Matt Smith gives out 2013 "Golden GIF" nominations. Our own Drew Sheppard receives a nom for his infamous 'Pitches of Yu' GIF.

Finally, because AJM told me I could, here's my review of the 2012 Rick Alverson film 'The Comedy': 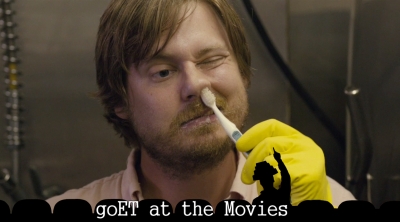 Star of 'The Comedy' Tim Heidecker on "enjoying" his film: "I don't think people will enjoy [The Comedy] ... It's like if the Romney kids were in 'A Clockwork Orange'."

Heidecker plays Swanson, a numb thirty-something Williamsburg man-child meandering through his life of means as he awaits his inheritance at his dying father's estate. Instead of catapulting this moment toward anything resembling mortality, Swanson dissolves into the anesthetized bosom of his like-minded friends (Eric Wareheim, Jeffrey Jensen, and LCD Soundsystem's James Murphy all playing something sort of like grotesque versions of themselves).

We then spend moments of escalation watching as Swanson toys with people to get a rise out of them as a substitute for honest interaction while we the viewer are left to figure out if there's any dignity remaining behind the apathy.

What is at play here by director Rick Alverson is a critique of a culture that shields itself from actual feelings and emotion with a wall built of the 21st century's version of the word irony and that of cynicism. Or, you know, the culture that so many of us reside in these days. Here we see the brick and stone of antagonism walling up the soul of our protagonist who is acting out as his own Montresor.

The point being, ultimately, this is a hollow experience. But who gives a crap, right? It's pretty funny to not give a crap. But it's pretty sad when you can't stop not giving a crap and sincerity is such a horror.

Heidecker, in a serious turn despite the title, does what he does best which is experiment with how people react to the loudly unexpected, only he's not layering on comedic frosting on the oddball cake this time. There's real sorrow under the bullshit and a lack of humor in his portrayal. And while Swanson is contemptible in virtually every way, Heidecker makes him a fascinating character to watch. The scenes where you get a modest glimpse of someone with an actual conscience behind the tactlessness are the moments the filmmakers are banking on. That is, if you can stomach the whole thing to get there.

Wareheim -- Heidecker's 'Tim and Eric Awesome Show, Great Job!' right-hand man -- is also playing to his strengths while dropping the guise of laughter for true annoyance. Among the band of aging New York hipsters, only Murphy seems out of place. That's not surprising considering this was his first film role as an actor and this particular brand of performance art comedy is something Heidecker and Wareheim have been honing for the better part of a decade.

One standout among the cast is Kate Lyn Sheil playing the one character that gives Heidecker's Swanson as much as she gets. Ultimately, however, in perhaps the film's most memorable scene, her presence is there to show that Swanson may actually be a sociopath.

There's no plot. There's no real story. There's no actual character development for a character study. It's like stepping into a real life in the way that a real life has no plot and no story. Only you get to step into the skin of the pitiless Swanson and you're suddenly a 35 year-old disaffected hipster. You're still rocking blue wayfarers. You can't talk to people without purposely trying to make them uncomfortable and you do this because you are unable to connect with them anyway. You're therefore left with pointless esoteric comedy as your only means of communication.

For example, at one point Swanson has lunch with his friend Bobby -- portrayed by Neil Hamburger nee Gregg Turkington, a comedian I feel is genuinely talented -- with the subtext being that of friends knowing that they're supposed to be providing comfort. However, as soon as the pretense of being able to open up deteriorates, their conversation devolves into an improvised bitter discussion on the fellatio-receiving prowess of the homeless. This is what passes for bonding for the 21st Century male.

I don't know if I can or should recommend 'The Comedy' as a movie that I actually liked. I think it is worth watching almost as an exercise in overcoming an extreme version of cringe-humor to see if you can find anything resembling humanity among the humorous. It's called The Comedy, only it's not funny; though that sometimes makes it funny. Or the comedy is so black you're only seeing the absence of color.

If you're up for watching ugly, fat white men wallow listlessly in their privilege, have at it. It's unpleasant. But it is almost so well done and acted from the perspective of capturing a freshly-realized lack-of-relatability, with unchecked entitlement, that you'll be fascinated while looking forward to getting back to the laughs. Or you'll hate it. It might just exist to be hated.

Either way, saying the words "Oh...I get it" is a fine substitute for actual laughter, right?

Should you find yourself intrigued, 'The Comedy' is available Instantly on Netflix.