Houston has the DH, Texas has the age of expectations. The Rangers lost Josh Hamilton and Michael Young, the Astros lost Mickey Storey. Lance Berkman is a Ranger, Lance Berkman is not an Astro

Previously on Being a Fan of the Texas Rangers:

It was last October, the Rangers had just let Joe Saunders and a Baltimore Orioles team running on unicorn farts and leprechaun hugs come to Arlington and eliminate them, and I was having a conniption fit on the front page. That post - perhaps the most raw and bitter that I had allowed myself to be in the Elvis Andrus Era (the era of winning) - came after the Rangers had coughed up a 5 game lead in the American League West with nine games remaining. I was bothered.

I also felt really pissed off at the Texas Rangers as a baseball team. I can honestly say that I don't know of many times that I've felt that specific way towards the club. I'm usually quite rational in the grand scheme of things regarding this team while being completely absurd during the individual plays and player antics and moments in that three hour window we get every day for seven months out of the year. For the 20+ years that I've followed the Rangers, they've usually let me down gently when it came to the big picture.

In the bad years, the low expectations of spring led to the comfortable numbness of the foreseeable slow descent in the summer. Usually the team would be out of it by mid-June and it was just about catching a ball game. In the good years, it was either nice to be a part of the race, exciting to taste October, or amazing to witness success and relevancy. Even the ending in 2011 brought fandom-validating despair, rather than abject anger. It seems amazing to me to even conceive it, but I'd take this 2013 season playing out the way the 2011 one did over having to relive the final two weeks of the 2012 season again.

That said, reading that October post now, I do feel a bit silly. While it felt appropriate at the time to lash out at a thing that had miffed me in a way that it hadn't before, I do understand that time, a Michael Young trade, laughable Josh Hamilton swings and misses at our caliber, and thoughts of Adrian Beltre and the game being on my television in a few hours, heals all baseball wounds. To go into a season without a bitter or bland taste, but an appetite for winning, is the windfall for all of our patience.

Toward the end I wrote, "The next time we see the Rangers play they will be a very, very different team. Maybe that's a good thing." And that certainly came true. Gone are Young, Hamilton, Ryan Dempster, Scott Feldman, Koji Uehara, Mark Lowe, Mike Adams, and Mike Napoli. Basically, the Rangers are going to have to make do without their entire cache of Mikes. Maybe Nolan Ryan is next to mosey off into the sunset, because when Nolan Ryan leaves, he's going to do it while moseying and a sunset will likely be involved.

There's no Zack Greinke. The Rangers didn't trade for Justin Upton or rescue Giancarlo Stanton. Pitchers on the wrong side of 30 brought in the likes of Travis d'Arnaud and Wil Meyers to make prospect-laden trades all the more unsavory for a team like the Rangers. This winter was trying at worst, boring at best.

But I believe in a lot of the decisions the Rangers made this winter, such as hanging on to Elvis or not striking while the iron on Hamilton was still cold. I believe the team has a lot of flexibility to make their move during the season when/if they finally find the right deal. I believe some of the change, such as the Young trade, had become a necessity. And, mostly, I believe the Rangers will contend for a playoff spot. That last thing there is just about all you can ask for out of your team on March 31.

Here's a breakdown of the pitching match-ups against the newest future thorn in our side, the Houston Astros:

Advantage: Matt Harrison Opening Day starter and The Spy in the Bleachers over Bud Norris' probable illiteracy (plus awful GB% [39.2%] and HR/FB [12.0%] tendencies). It turns out, I like Matt Harrison.

Advantage: I vividly remember a start made by Colby Lewis 1.0 back in August 2003 (shockingly nearly a decade ago now) when young, wild Ranger prospect Lewis struck out 10 White Sox hitters to become the first Ranger to K in double-digits in something nearing 600 starts. It was a joyous event. The Rangers went nearly all of the 2000 season, the 2001 season, the 2002 season, and into August of the 2003 season without a starter striking out more than nine batters. Well, Yu Darvish averaged over ten strikeouts per nine innings (10.40 K/9) in 2012. Averaged. Yu is something else.

If you need additional daydreaming on the kinds of things Yu Darvish is capable of doing in 2013, here's his final month and a half from 2012 spanning eight starts:

Golly. We're going to get so spoiled by Yu Darvish.

The Astros won 55 games last season. For reference, the "disappointing" 2012 Rangers won game No. 55 on July 17. Lucas Harrell won 11 games last season. 20% of all Astros victories came with Harrell on the mound. And yet, he's facing Yu Darvish and he plays for the Astros. Whoops.

Advantage: Alexi Ogando was very good as a starting pitcher for much of the 2011 season before he wore down. Even as a reliever Ogando was a more valuable pitcher than Humber in 2012 and Humber threw a Perfect Game. Speaking of, how do you so thoroughly and historically dominate a baseball game and still be less valuable than a replacement level player? Oh, right. You face the Mariner offense. 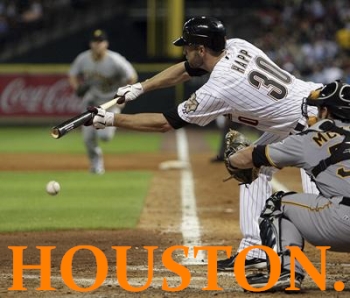