Not even the SB Nation standings data widget is willing to recognize the Astros. (They're 3-6, by the by. P.S. LOL Angels.)

We know what happened from there. The Rangers, as not-division-champions, were the first victims of Bud Selig's one-game Wild Card Carnival of Manufactured Drama. The reason to bring this up is simply because I hope the taste in the mouth of the Rangers is as bitter as our own when unable to force thoughts of last season down deep. Mainly because, in the AL West last season, the Rangers went 27-30.

That included going 10-9 against these Mariners who finished in last place last season. I don't think it's unfair to say, seeing as the division came down to a game, that play within the division cost the Rangers the West in 2012. To win it in 2013, they're going to have to do much better. A good way to get heading in that direction would be a strong showing in this series in Seattle where they went 4-5 last season.

As for the Mariners, they're still trying their damnedest to find young positional players who can live up to expectations and turn around an offense that has kept them in the AL West cellar for four of the last five seasons. As a franchise, the Mariners have only had two winnings seasons in the last decade. It's been rough in the Emerald City.

After struggling to find those core members that drive an offense in an environment that was harsh to hitters, the Mariners enacted a plan to jump-start their prowess at the plate by moving the fences in at Safeco Field. So far, there's been some positive results, if positive results means hitting dingers.

In 2012, there was 116 home runs hit at Safeco Field between the Mariners and their opponents. That was 1.43 dongs per contest. So far, in the hilarious sample of three games, there's been 13 home runs. That's 4.33 per game. Three games isn't much to go on, but if Safeco has opened up a little, the Mariners might be closer to realizing the dream of putting together a Major League team that scores runs.

Here's a breakdown of the pitching match-ups against the sluggin' Seattle Mariners:

Advantage: Felix Hernandez. The advantage goes to Felix Hernandez. Justin Grimm might someday be a serviceable starting pitcher, but even on that day, you'd still rather have Felix Hernandez if given the choice. However, as we all know, one of the many charming things about baseball is, for any one game, Grimm and the Texas Rangers can win a game against Felix Hernandez and the Seattle Mariners.

Advantage: Give me Yu Darvish against most anyone. Even though the Mariners were something of an unexplained nightmare for Darvish last year. In Yu's first three starts against the Mariners, totaling 16 innings, he allowed 17 runs. It wasn't until his final start against Seattle that he was able to handle them (7 IP, 1 run on 2 hits). Perhaps coincidental, perhaps not, that final start was the first one after Seattle had traded Ichiro Suzuki. Ichiro terrorized Darvish in '12, collecting a double and a triple among 6 hits in 11 ABs. Ichiro is in New York now so perhaps the Seattle curse on Yu was lifted.

Hisashi Iwakuma didn't fare much better against the Rangers. In 20.1 innings against Texas last season, Iwakuma allowed 12 runs. It's not Hokkaido Nippon-Ham Fighters vs Tohoku Rakuten Golden Eagles but it should still be pretty good.

Advantage: It's the battle of surprising rookie rotation entrants. In one corner, you have Nick Tepesch who was absolutely stellar in his Major League debut on Tuesday. In the other corner, you have Brandon Maurer who has been absolutely dreadful two starts into his big league career. Advantage: Tepesch. However, the Mariners can spoil the fun of this rookie billing by replacing Maurer with recently acquired Aaron Harang. 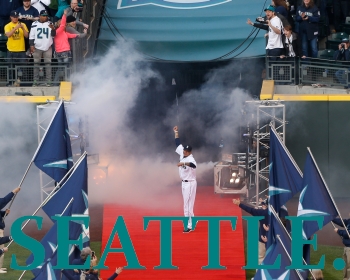