When I was going through the articles for the morning update, Todd Wills' stats comparison piece on the offense through the first 13 games of this season versus the first 13 games of last season caught my eye. A lot has been made about the offense coming out with barely any cylinders firing, so, it was mildly interesting to reminisce on how the team was performing last year when people were still comparing them to all-time great teams a few weeks into the season.

It's sort of a weird exercise to take a 13 game swatch of anything regarding a baseball season and compare it to a swatch of 13 different games within that season, much less those from an entirely different season. Seeing as how baseball begins with a clean slate, there's very little to go on trend-wise. Though, as pointless as I know it is, I do have an unhealthy knack for attempting to see how a new season is stacking up by how things were going in the previous season at any given point in time.

This is how I convinced myself that Ron Washington teams were perpetual slow-starters. But, mostly, the Rangers just became a better franchise that put better teams on the field and those teams were capable of winning more games over any two week period than they were in the earlier Ron Washington days.

It is obvious now that the '12 team began the year with several components in the lineup hitting well, whereas this season has seen many members in the order facing slumps. And while the Rangers began the year at home for seven comfortably warm dates in those first 13 games, you can't blame everything on an unusually cold day in Arlington and standard biting conditions in Seattle for all of the mediocre Ranger hitting so far this season. After all, the Rangers did play a series in Minnesota last season and scored 14 runs in a series sweep.

The real glaring piece of information that I noticed per Wills was that the Rangers scored 30 more runs (49 in '13 vs 79 in '12) through 13 games last year compared to this year. Granted, that was an unsustainable average of 6.1 runs per game, but that goes a long way to explaining the difference between an amazing 11-2 start and a solid 8-5 start.

Not to excuse what very well could end up being a simple downgrade in hitting talent, but it might be worth noting how much the environment for scoring runs has changed in baseball. And I'm not just talking simply about an expected change over a span of a decade or so. There has been change even in just the last few seasons. Things have taken a dramatic turn toward famine when we've been used to a proverbial feast of runs.

Runs are down in baseball across the board and the environment for scoring runs that led to the tradition of scoring runs in big numbers for the Ranger franchise - or any team - just doesn't exist anymore in 2013. So, even if the bats do get it together, we very likely won't see a return to the output of scoring that we've had a reputation for in Texas, and that's before taking talent into account.

All of this is to say, we might want to get used to the 4-3 baseball game.

Here's a breakdown of the pitching match-ups against the Lovable Losers of the North Side:

Advantage: Derek Holland has started The Year of Holland off on solid footing, putting together two quality starts. He'll allow his share of home runs, but so does Colby Lewis. Perhaps he'll someday learn the Lewis trick of keeping those home runs as the solo dong variety. Of course, there's that pesky issue of scoring runs, and the Rangers have, so far, scored a total of three runs in Holland's starts.

I'll give the advantage to Wood, however, because he's had himself an equally solid beginning to the season and the only guys he's faced from the Rangers' lineup are Lance Berkman (who is 7-11 against him), Jeff Baker, and Geovany Soto. I wouldn't be surprised if all three of those people end up watching Wood pitch from the bench.

Advantage: I know it sounds bleak but I have to side with the opposition instead of Justin Grimm, even with a starter as vanilla as Carlos Villanueva. I don't know that I'd select Grimm in a match-up against very many Major League pitchers just because I don't know if he's a Major League pitcher himself yet. His first start wasn't very encouraging, but, then again, the Rangers did win that game and Felix Hernandez was the opposing pitcher on the mound. Who is Carlos Villanueva to Justin Grimm when he's already defeated The King? (Note: I am in no way attributing that win to Justin Grimm's pitching.)

I suppose it is worth noting that Villanueva has only allowed a single run all season and that came on a Justin Upton home run in the first inning of Villanueva's first start of the year.

This should be a good match-up between two recently converted starters (Ogando in 2011, Samardzija last season) with high K rates (Samardzija with a Yu-ian 12.36 K/9, Ogando with a solid 9.18 K/9) and fun to say last names. I will give the advantage to Ogando because his overwrought origin story (spent years trying to join Rangers after involvement in a human trafficking ring) is more interesting than Samardzija's (played football well). 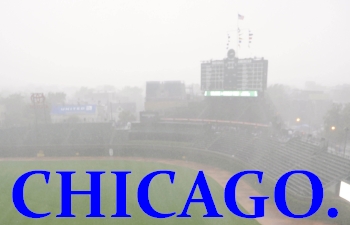 Rangers' 2012 Record vs. Chicago Cubs: Did not play 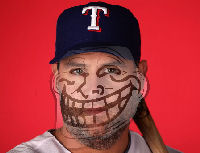 "If they're looking for a guy to push the button when they blow the place up, I'll do it," he said.