The good news: The Rangers finally play an opponent for the second time. The bad news: The Mariners are so boring

It's the Mariners. It's the Rangers. We just did this thing like a few hours ago only now it will be in Arlington where it isn't minus 20 degrees with a Pacific Northwestern windchill of goddamn it's cold.

I miss not being able to wait until the Rangers could leave the Kingdome. I miss being secretly jealous of them for getting to watch Griffey. I miss feeling like they were secretly jealous of us for getting to watch Pudge. I miss knowing they'd be showering Monopoly money and boos on A-Rod. I, however, do not miss Mariner fans of winning Mariner baseball. Losing is a much better look on them. But that's just a part of the cycle of rivalries. I'm sure they feel the same way about us.

There's going to come a year when the Mariners are good again. Because of the cyclical nature of sports, it's just sort of impossible that the Mariners will be on the downside forever; even if it seems like they're trying their best to make sure of it. There's an inevitability to seeing those teal-shirted jerks playing meaningful baseball again someday. I'd like to think I'll be ready for it, but I probably won't be.

I imagine the year that they are good again, they'll do so as a surprise team. I imagine there won't be a season in the near future where people expect the Mariners to win and then they do. Instead, they'll pull a 2012 Baltimore Orioles on the America League West one of these years and we won't see it coming. I don't believe that this year will be that year - they just don't have the talent yet, but it's coming. And when it does, these games against the Mariners will finally make me feel something again, so I'm sort of looking forward to it.

I'm just going to hate every second of it.

Here's a breakdown of the pitching match-ups against the perpetually threadbare Seattle Mariners:

And even though Saunders is 3-7 with a 5.79 ERA against the Rangers in his career, he's allowed only one earned run in his last 12.1 innings against Texas dating back to last October. That includes the zero runs (1 unearned run) he allowed in seven innings last Saturday against the suddenly anemic offense of the Rangers.

Obviously, the pitching match-up favors the Rangers in this game but I've been fooled before by assuming the Rangers could win a game with Joe Saunders and Yu Darvish on the mound. It would do some hearts good if this were the game that the Rangers finally put up double-digit runs.

Advantage: In one of those games that is perhaps a clue that the offense isn't going to be quite as potent as we've come to expect, last Sunday the Rangers and Mariners played a game with this exact same match-up and the Rangers scored three runs in a loss. That was pretty miserable for two reasons. 1) Nick Tepesch allowed only four runs in his second start, was solid, and probably deserved a win. 2) Brandon Maurer allowed only three runs (two earned) in his six innings after coming into the game having allowed 12 runs in his previous 6.2 innings.

Maurer was the better pitcher a week ago but it would be pretty disheartening if the offense doesn't get to him in this game in Arlington. With that said, it will be interesting to see how Tepesch fares with seeing a team for the second time in a hitter's park.

Advantage: This series has a definitive descending order of interest in terms of pitching match-ups. You've got Yu Darvish and his struggles against the Mariners vs Joe Saunders and his sudden dominance against the Rangers in the opener. Then you've got two rookies who just squared off in a one-run game less than a week ago as the middle game. And, in what could be one of the least interesting match-ups on paper (but maybe that makes it interesting?), you've got Justin Grimm and Aaron Harang going in the finale.

Both of these guys are depth-testers. Both of them have pitched one game for their team and might not be long for their respective rotations. Both have hilarious peripherals due to limited innings. Unfortunately, Grimm's peripherals are hilarious for the wrong reasons. I'd suspect that Harang is the better pitcher, but I would be disappointed if even this Rangers' offense doesn't score runs against a guy like him. 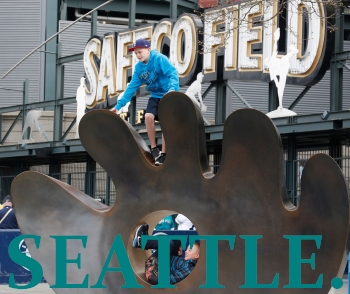