Of Expectorating and Run Expectancy: The Tale of a 7th Inning Squirt-off

Share All sharing options for: Of Expectorating and Run Expectancy: The Tale of a 7th Inning Squirt-off

The Rangers and Angels were embroiled in a tight battle yesterday evening. It was fascinating baseball. So, I went back and watched some of the game this morning and something really flew in my face. In this specific sequence, the Rangers had just matched the Angels' 6th inning three-run frame with one of their own in the top of the 7th, and they were still rallying for more.

With runners on first and second, after Jeff Baker reached on a fielding error by Angels pitcher Scott Downs, which also allowed the tying run to score, Mitch Moreland came to the plate with a rather drool-worthy opportunity to bust the game open. What happened next can only be told by the special language of baseball players letting loose with the water.

Downs got a curveball over for a strike to get ahead 0-1. Moreland spat on the ensuing sinker to even the count 1-1. Downs, meanwhile, spit with regards to the call: 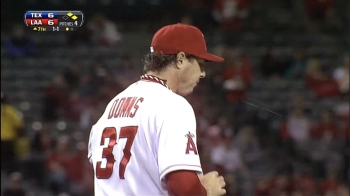 Baker prepared to take his lead off first but paused to do what baseball players do. Belch. Spit. Grope. (mouse over GIFs for hot phlegm action):

Downs went back to the hook on the 1-1 pitch and got Moreland to swing through it. Being careful as he received the signs for the 1-2 pitch, Downs spewed his disapproval:

Downs stepped off the rubber twice as he wasn't able to get on the same page as catcher Chris Iannetta. This gave Moreland a chance to casually hawk one:

Even Nelson Cruz was impatiently slobbering for more runs:

Unfortunately, Downs was able to induce a weak dribbler back to the mound on a 1-2 curve and then he started an inning-ending double play to expel of Moreland and keep the game tied.

Dave Anderson summed the result up with sputum of his own:

The at-bat, the rally, the inning, and the microcosm (not to mention microorganism) of baseball was finished. But not until Downs hurled one last time: 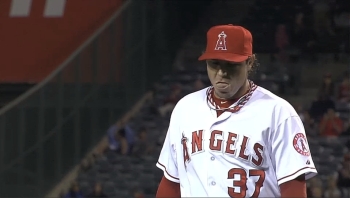 Eventually, of course, the Rangers were able to get the bad taste out of their mouths and win the ballgame thanks to an A.J. Pierzynski home run. You have to assume that it was a tough one for the Angels to swallow.