Somehow, after tonight, an entire month of this young season will already be in the books. Why I remember the days when we were complaining every day about the Rangers' offseason. It seems now like nearly 50 Yu Darvish strikeouts ago.

How many words were written and concerns fretted over the handling of the impending Jurickson Profar/Elvis Andrus/Ian Kinsler problem? Nary a moment went by without discussion of the endlessly unresolved 5th starter conundrum. The bullpen seemed destined to rack up numerous woes in addition to blown saves. But for all of the winter of our discontent, the spring games that matter have actually been quite kind to the Rangers this April.

Texas currently has the second best record in baseball and leads the American League West by a couple of games. We've seen Profar studiously take in Triple-A Round Rock, while Kinsler is playing well, and Elvis was locked up for several more years. Oh, and that pitching? Well, the Rangers lead the majors with an ERA of 3.02. The next closest is the Cardinals at 3.24. The bullpen has been sturdy with the emergence of Joe Ortiz and Tanner Scheppers. Nick Tepesch and Justin Grimm have teamed up to solve some of the back-end-of-the-rotation depth questions thus far. And, before you know it, Colby Lewis will be back.

Not bad for a team that popped up on every Hot Stove "losers" list while the 9-16 Anaheim Angels were crowned the back-to-back offseason champion.

It hasn't been all peaches and gravy for the Rangers, however. The offense is scoring 4.32 runs per game. That's down from the 4.99 per that they scored last season and more in line with the offense of 4.42 runs per game that we saw from the Rangers last September when it seemed like they just couldn't buy a run to save their season. This team looked particularly ugly at the plate in their most recent series in Minnesota when they scored a total of eight runs over the four game set.

It's interesting to note, though, that of the Rangers first 40 games this year, only 15 of them will be games in Arlington. The Rangers played nearly as many games in their recent road trip (seven games) as they have home games in the entire season (nine games) so far. So, while the offense might be a concern in the early going, it's possible that they just haven't had enough stat-padding home cookin'.

Nevertheless, it'll be nice to get back to The Ballpark and see if that can jump-start the bats. And, if nothing else, we can begin to slowly retire phrases like "to start the season" and "It's early, but," from our lexicon for another year. The 2013 season is in full swing even if the Ranger hitters aren't just yet.

Here's a breakdown of the pitching match-ups against the bad guys wearing road greys from Chicago:

Advantage: Jose Quintana is left-handed and having himself a good season so far. I'm sure Jose Quintana will have himself a fine game. But it's Yu Darvish. Just look at what Yu Darvish is doing so far this season. It's nuts. With another start similar to the ones Darvish has already had this month, we might be looking at the best month by a Rangers pitcher ever.

Advantage: Chris Sale hasn't quite been 2012 Chris Sale yet. Although, in his last two starts he's allowed only 4 runs in 14 innings with 13 Ks to go along with 5 walks. Perhaps facing the Rangers is just what the doctor orders because he is left-handed and he gets to face Mitch Moreland and David Murphy a lot.

Nick Tepesch has statistically had a better season than Sale over the handful of starts that each have had. That's not particularly meaningful, it's just fun to note. Nick Tepesch, in this set of data, has been better than Chris Sale. Chris Sale, over the course of the 2013 season, has not been better than Nick Tepesch. Any way I type that, it's quite enjoyable for me.

Obviously, I don't believe that Nick Tepesch is a better pitcher than Chris Sale, but just look at them FIPs, man. April Chris Sale ain't got nothing on April Nick Tepesch. Take that, Dunk City.

Advantage: Jake Peavy isn't left-handed. Jake Peavy is just good. Justin Grimm has exceeded every expectation that I personally had for him so far this season. Of course, that spans 17 innings, but you can't argue with that curveball. Grimm's curve is currently the 6th best among starters via Fangraphs' pitch value! That's really neat and proof that my eyes haven't been deceiving me as I've admired Grimm's yakker. If Grimm has his curve going, he'll be tough once again. 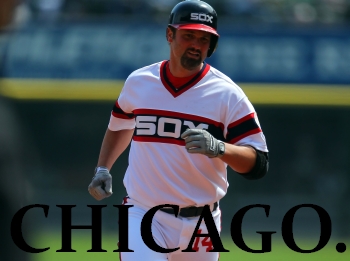 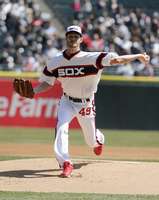