The Hamiltons spent all winter trying their best to make themselves villains in Arlington. Note to the Hamiltons: We don't need any more satanic Angels to help us get up for our home opener against Southern California's second-rate team

You want gauche? How's this for gauche? 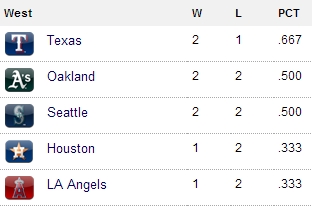 See, Josh? That's what we care about. Sure, Hamilton seemed nearly manic during the last few months trying his damnedest to ensure that this weekend would be all about him and how mean everyone in Texas is going to be to him. And, to that extent, it will certainly be about him some. To the FOXs and ESPNs, who put these games on their schedule, they've already got the narrative of Josh Hamilton's return to Texas written. But me? I'm more interested in hearing Chuck Morgan's voice again.

Ever since that mid-December day, when the Dodgers had finished making Arte Moreno feel inadequate and the Angels gave Hamilton his big payday, Josh has been caring a whole lot about making sure everyone knows how much he doesn't care. He doesn't care, he says, about what happened in the stands in Arlington last October and what will happen today. He doesn't care what people think, as he's talked to seemingly anyone with a pen and a piece of paper, about how, and the exact method in which, he thinks others will show their personal level of interest in him.

Except, the thing with Hamilton is, he does care. He cares a whole lot about people's perception of him. And the entire build-up to this series that has been perpetuated by Camp Hamilton has been all about Hamilton needing to insulate himself from the one thing ever really wounded him when he played here. Guys, it really hurt Josh Hamilton when you booed him.

Hamilton's spent a winter preparing himself for being disliked, by making himself unlikable, so that it might take the serrated edge off the blade. By making himself into a man to be derided, I think he feels like it'll hurt less when it actually happens. Hamilton's become a walking, talking perpetual self-fulfilling prophecy machine. Now he won't be surprised when Rangers fans don't honor his time with the Rangers because he's made himself dishonorable. However, all this really means is that Rangers fans are completely in Josh Hamilton's head and there's maybe no stranger place to be.

The unfortunate thing about the sideshow that is Josh Hamilton's fragile psyche is, simply, I will miss Josh Hamilton the talented baseball player. In addition, I always thought Hamilton had an underappreciated sense of humor that was often buried by his story that required a straight face. It's just sad to see that Josh seems to think that the punchline should be on Rangers fans now because he feels like we all missed the joke.

So boo or sit quietly because a t-shirt and a "movement" told you to. Or even cheer a guy who was as gifted a baseball player to wear a Rangers' uniform as perhaps there ever has been. It doesn't matter how you choose to address Josh Hamilton as an Angel because he's an Angel. It's not about Josh Hamilton or how we pay our respect or show our disdain anymore.

It's about the Rangers vs the Angels.

Here's a breakdown of the pitching match-ups against the currently last place in the American League Anaheim Angels:

Advantage: Derek Holland did say that this was going to be his year. So, who am I to not believe a guy with a face like that? Also, have you seen Jason Vargas? Now that's a face I wouldn't trust with optimism or games pitched at The Ballpark. Plus, immaturity warts and bouts of inconsistency blemishes and all, Derek Holland is a better pitcher than Jason Vargas.

Advantage: This is an interesting match-up if only because when Mark Teixeira was on the trading block in the middle of the 2007 season, and the Braves were rumored to be potential suitors, it was Hanson that many felt the Rangers had to ask for in a trade with Atlanta. Well, the Rangers ended up with Matt Harrison. In the long run, that's worked out very well for Texas.

Tommy Hanson had a fantastic start to his big league career, compiling 6.7 of his career 9.2 fWAR in his first two seasons. Since then, Hanson has battled injuries and declining fastball velocity (from an average of 92.3 in 2009 to 89.7 last season) to see his production drastically slip. It's been the complete opposite story for Harrison who compiled only 1.0 of his career 9.3 fWAR in his first three seasons before establishing himself as a quality starter. Harrison has also seen his fastball velocity increase from 90.3 in 2008 to 91.9 last season.

With all that said, you can't blame the Angels for acquiring a starter who has put together a 4 win season as recently as two years ago for relief pitcher with his own mechanical peculiarities. I'm just glad the Rangers ended up with Harrison in the trade that just keeps on giving.

Advantage: Give me this: 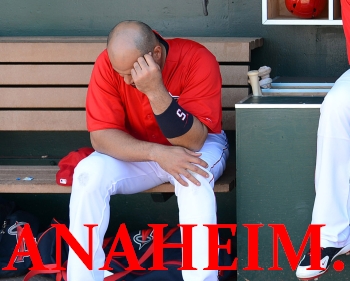