Opening Day is history, the home opener is in the books, now it's time to start the routine

Share All sharing options for: Series Preview: Tampa Bay Rays @ Texas Rangers - Back in the Swing

This season has already seemed fairly eventful for only being one week old. We had an Opening Day on national television against that other Texas team making their American League debut. We had, in what took time to apprehend as not an April Fool's Day joke, the club's All-Star shortstop forgoing talk of usurping Derek Jeter to surprise us by signing a long-term extension. We had Yu Darvish being this | | close to perfect in one of the best outings in the history of this franchise. Then the Rangers came home to open The Ballpark against the rival Angels with now rival Josh Hamilton.

It was an exhausting first week for being gauche where a measuring contest was held between divisional rivals. Perhaps the most contrasting emotions came on Friday when Robbie Parker held onto Pudge Rodriguez just minutes before the fans in the stands were letting Hamilton have it. Before the series was finished, the Rangers knew that perhaps the jet stream hadn't gone away and the Angels now know the Rangers aren't going anywhere.

At some point this season, probably even soon, a week will go by and the Rangers will win and lose some games, and it'll be unremarkable in the larger scope of the grand game. Even though we'll live and die with each of those games - almost certainly in the Game Day Threads, regardless, it is comforting to know that it's all going to become routine again. 7:05 will roll around and there will be another baseball game.

But that week probably won't be this week. At least, not for Nick Tepesch. It's not every week that a guy who didn't even get to partake in photo day during Spring Training gets to make his Major League debut during the first homestand of the season. But because of a nearly ten month chasm that has been the fifth starter spot in the rotation, that's exactly what is going to happen on Tuesday.

Tepesch was born unto the Rangers on Draft Day 2010. The Rangers selected Tepesch in the 14th round that night but we were too busy being angry at Cliff Lee for dominating the Rangers as a Seattle Mariner while hating on the selection of Mike Olt to even really notice. A lot has changed since then. Cliff Lee became a Ranger, Mike Olt became a meme first and a major prospect second, and for all Tepesch has ever known as a professional baseball player, the Rangers have been a successful Major League franchise. And now he gets to be a part of it.

The first time I even remember thinking about Tepesch, outside of draft day scouting reports, is when photos for the 2011 Hickory team were released and Telegraph and I spent an evening using them to tell a story. That's Tepesch saying "Coach?" toward the end of the subthread. But I always remembered the name Nick Tepesch from that point on and became something of a secret admirer and/or hopeful supporter. Even a month ago, I never thought he'd be facing the Tampa Bay Rays this Tuesday and neither did you. And that's about as far from routine as it gets.

Here's a breakdown of the pitching match-ups against the playoff opponent from days of future past Tampa Bay Rays:

Advantage: When Alexi Ogando was a starter in 2011 he faced the Rays only once, in a game where he allowed 3 ER on 5 hits in 2.2 innings of what would be one of his final starts of that season. By that point, Ogando had nearly quadrupled the number of innings that he had pitched in the previous season. I feel it is safe in say that the Rays really haven't experienced Starter Ogando. In fact, of the players on the Rays, only Yunel Escobar has faced Ogando more than five times.

Jeremy Hellickson, on the other hand, does something that has driven Ranger offenses of the last few years absolutely batty. Namely, he throws a bunch of changeups. In fact, Hellickson throws his change about 30% of the time and the Rangers have had a recent history of difficulty laying off that pitch. Hellickson has faced the Rangers twice (in regular season play) and allowed 2 runs in 12 innings. I don't know who I would favor in this matchup but we'll go with the home team.

Advantage: It's hard to give the advantage to Nick Tepesch because he's making his Major League debut in Arlington against a contending team from the American League East when just months ago he was having his fair share of struggles with teams from the Texas League South. If the scouting reports and eyeball test of spring ring true, at the very least, he won't get rattled.

The good news is, he is facing what once was Fausto Carmona. And it's not like now-Roberto Hernandez has been anything resembling good for several years now. And more to that point, he's never been very good against the Rangers, going 2-8 with a 5.37 ERA in 12 career starts against Texas. Then again, maybe the Rays saved some Fernando Rodney magic for Hernandez.

Advantage: Matt Moore has only faced the Rangers once. That was Game 1 of the 2011 ALDS. In case you have forgotten what happened in that game, Moore was making only the second start of his big league career, after the Rays had used the top of their rotation to finish their Wild Card comeback at the end of the season, and he promptly pitched 7.0 2-hit shutout innings in a 9-0 win. Somehow, the Rangers missed Moore all of last season and I'm not going to complain about that.

While Moore was something of a disappointment last season (He especially struggled with his command which caused him to walk 4.11 batters per 9) - even though the expectations were enormous - he's still looked at as a potential ace in waiting. It's not hard to see why. He's a left-hander with swing-and-miss stuff and a fastball that averages around 94 MPH. 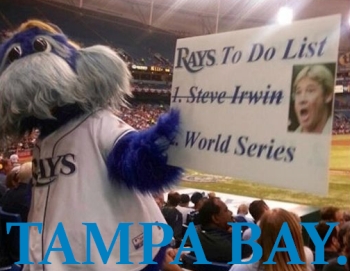