Thanks for diverting the local media's attention away from Nolan Ryan Poutfest '13, Josh

By ghostofErikThompson@apoplecticfittz Apr 8, 2013, 8:00am CDT

Enough of this Josh Hamilton nonsense. He's their problem now. Instead, let's reminisce on how it was a week ago that word got out about Elvis Andrus' extension. Ah, the good ol' day.

Speaking of good days, Todd Wills has the Rapid Reaction to the Rangers' 7-3 victory over the Anaheim Angels.

Richard Justice as a piece on Darvish gutting out a start where he had limited control of his pitches and limited skin on his ring finger. Or, as Justice writes, the kind of outing aces have when faced with the potential for disaster.

Anthony Andro writes that the Rangers may not have answered the irrelevant question about whether they play in a baseball town or not over the weekend, but they did help to provide some preliminary answers to questions that have been asked about the team since last fall.

Jean-Jacques Taylor has a piece on Kinsler's solid start and ponders if his extremely rare opposite field home run last night is a sign that Kinsler's new approach at the plate is taking shape.

Wills writes that the Rangers have already announced that Darvish is expected to make his next start after being removed from last night's game (though probably already nearing his pitch limit) with something akin to a blister.

Gil LeBreton has a piece on the epidemic of poor outings by No. 1 pitchers around Major League Baseball yesterday, with the Rangers surviving the ace agitation to pick up a win.

Session handles the T.R. Sullivan Notebook to write on A.J. Pierzynski's first rest of the year, Nelson Cruz's hot start, and other items.

Davison's notes cover Cruz's calescent kickoff, Mitch Moreland's blah beginning, and Ogando's rising resoluteness, among other notes. Including this one which only further angers me:

Washington on Leonys Martin arguing balls and strikes with home-plate umpire Wally Bell on Saturday: "He's just competing and he's going to have to figure out how to handle an umpire. Wally told me he wasn't going to run him; he was going to educate him."

In case you missed it, here was the 1-0 pitch the Wally Bell thinks Martin needed to be educated on: 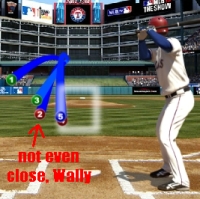 Grant blogs that tonight will more than likely be the last game for Julio Borbon as a Texas Ranger. Go Chris Davis it somewhere, Julio.