Nope. SB Nation, along with the rest of the world, still refuses to acknowledge the Houston Astros.

When I look over the schedule, and notice whichever team is playing the Astros, I often momentarily mentally decide that it's surely the Interleague contest that's going on that day before remembering what's become what. I was thinking while the Rangers were in Milwaukee that it was annoying that the pitchers were going to have to hit with the team down in Houston this weekend.

The Rangers are in the middle of a weird road trip where they'll have played in four different cities to play nine games. Maybe the weirdest aspect of this trip is that they'll be playing games in Texas this weekend, then going to the west coast for a series against Oakland, before returning home to Texas to finally play more games in Arlington. I'd imagine road trips that include a swing in Texas have been pretty rare for the Texas Rangers.

Here's a breakdown of the pitching match-ups against the thanks-for-at-least-beating-up-on-the-Angels Houston Astros:

Advantage: I don't know who Dallas Keuchel is, but I know he's left-handed. I also know that the Astros sort of rigged things to put a couple of lefties in the rotation because they're facing the Rangers. Philip Humber was moved to the bullpen to make way for Keuchel. This is going to be Keuchel's first start of the season. Keuchel has pitched 16 1/3 innings of relief and has been pretty bad at doing it. He's a Houston Astros pitcher, so bad is to be expected. He made 16 starts last season, the first of those was also against the Rangers. In that start last June, Keuchel went five innings and allowed a run on four hits against a better Rangers' offense.

Alexi Ogando bounced back from couple of middling starts with six innings of one-run ball to keep the Red Sox at bay in his last outing. Ogando isn't striking out many folks of late -- no start with more than five Ks in his last six starts -- but perhaps that will change with the opportunity to face Houston. After all, the last time Ogando faced Houston, he struck out a career high ten hitters.

Advantage: Erik Bedard isn't what Erik Bedard used to be. For example, I don't think he'll be be throwing a complete game two-hit shutout with 15 Ks like he did against the Rangers back in 2007. But he was moved from the bullpen back to the rotation to face the Rangers I suspect because the hand that he throws baseballs with is his left one.

Were anyone going to throw a complete game two-hit shutout with 15 Ks in this game, I'd suspect it would be Yu Darvish. I mean, just a month again, against this Astros' team, at Minute Maid Park, he threw 8 2/3 innings of one-hit shutout baseball with a career high 14 Ks. You might remember it as the time Yu Darvish nearly threw a Perfect Game.

Advantage: Hey look, a right-hander. Jordan Lyles was recently called up to the Astros rotation and has made two starts this season. In total, the three starters for the Astros in this series have complied 48 1/3 innings. For comparison, Yu Darvish has thrown 45 2/3 innings himself so far this season. So, we might end up seeing a lot of the Houston bullpen. Well, wouldn't you know it, the Astro bullpen has been by far the worst in baseball. Lyles started against the Rangers twice in 2012. He gave up nine earned runs in 9 1/3 innings.

Nick Tepesch's armor of poise and guile has been dented by a couple of poor starts against each team from Chicago. Nothing like a start against the Astros to hopefully cure what ails ya. If not, Tepesch will be eyeball deep in Colby Lewis watch 2013. 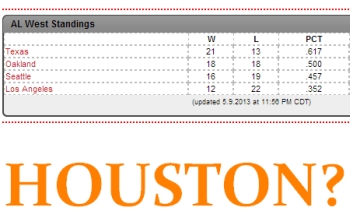 Rangers' Record vs. Houston: 2-1 (All at Minute Maid Park)