Texas 3, Oakland 4 - Jarrod Parker and the A's bullpen survive after knocking out a rattled Martin Perez - Rangers lead the American League West by a game

Texas 1, Oakland 3 - Matt Harrison and the Ranger offense fails to delivery against now Astro outcast Travis Blackley of all people - Rangers and A's are tied for the American League West title with a game to play

I don't have historical wells of hatred stored up for the A's like I do for the Seattle Mariners. I don't currently despise Oakland like I do Anaheim. But that isn't to say that I like the A's and those three days last October remain a bitter monument to one of the more disappointing seasons that we've experienced as fans of baseball. And for that, I hope the Rangers beat the hell out of the A's this week and forever.

Since the A's are currently clinging to second place:

Here's a breakdown of the pitching match-ups against the below .500 but still in second place Oakland Athletics:

Advantage: Grimm vs Griffin sounds more like a ceremonial jousting clash being held during the King Joffrey Lannister royal wedding to Lady Margaery Tyrell at King's Landing than an American League pitching match-up at O.Co Coliseum in Oakland, California.

Luckily, for the Rangers, as of yet, Justin Grimm has not been a work of fiction. Though comprising only 28 2/3 innings, Grimm has given the Rangers everything they could have hoped for from a starter plucked from the depth-pile after Matt Harrison was lost to a back injury. And while he hasn't won in each of his previous starts, he's pitched well.

Against Chicago, back on the 2nd, a 6th inning three-run home run was all the scoring the White Sox mustered but the Rangers managed only a single run themselves. In his last start, against Milwaukee, the Rangers' defense had a bit of a disaster in the first inning and Grimm coughed up five runs. He was able to go four more innings without allowing a run and struck out seven Brewers overall. That was likely Grimm's worst start since his first start in Seattle back in early April, so it would be nice to see him bounce back.

As for A.J. Griffin, his hair looks like a giant mustache:

Advantage: Derek Holland was worth 1.7 fWAR last season. Already, before mid-May, he's been worth 1.8 fWAR. You try telling me that this isn't The Year of Holland! With that exclaimed, is Holland's walk rate in The Year of Holland for real? He's walking less than two batters per nine innings. His career best walk rate over a full season was 2.67 BB/9 last year and he's improved that by nearly a walk less per nine. Along with the oft discussed rediscovery of the plus changeup, Holland's ability to limit walks is a large part of this emerging story.

Now you want to talk about limiting your free passes? Bartolo Colon currently has a 0.22 BB/9. That's because he's walked one hitter all season. One in 41 1/3 innings. Only Jacoby Ellsbury on April 23 has worked a walk against Colon on the year. That's pretty remarkable.

Advantage: Dan Straily does one thing well. He strikes people out. In the minor leagues, over five seasons, he had a K/9 rate of 9.7. Last season, in Double A and Triple A, he struck out 11.2 per nine. And, thanks to an Astros-aided start this season, he's striking out 10.38 per nine in the big leagues in 2013. Well, bad news for Straily. No team strikes out less than the Rangers. The Rangers have a league low 16.1 K%. That means the Rangers are going to put it in play and hopefully do some damage.

There's going to come a time, perhaps very soon, where folks will begin to wonder if it is time to put Alexi Ogando back in the bullpen. Ogando has been serviceable as a starter, but you could probably make a compelling argument that he's been the worst starter for the Rangers so far this season. It isn't like Alexi Ogando is killing the Rangers out there -- he's given up three earned runs or less in all but one of his starts, for example.

The problem thus far with Ogando has been his command. And surprisingly enough, it isn't the command of his breaking stuff. He's been having trouble locating his fastball. That's caused Ogando to pitch beyond the 6th inning only twice this season (one of those being his first start of the year against the Astros) and have what would be a career high walk rate of 3.71. He hasn't been wild or anything, he's just been inefficient.

I'd imagine there's still ample time for Ogando to work out the kinks with his command before the whispers of a return trip to the 'pen become roars. But with Martin Perez nearly healthy, Colby Lewis rehabbing, and Grimm and Nick Tepesch holding their own in the big league rotation, it might be something the Rangers eventually have to consider. Nevertheless, it's the kind of problem the Texas Rangers have almost never had. 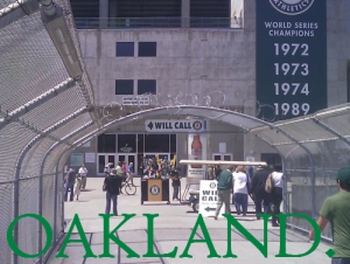