Other than the New York Yankees winning while utilizing decent starting pitching, miracles, and Vernon Wells (A.K.A. proof that miracles are real), the Rangers and Tigers have been the two best teams in the American League so far this year. Record wise, the Tigers are doing that Detroit thing where they let the Royals or Indians hang around through the first few months of the season before they inevitably run away with the division in August and September. This is just what the Tigers do.

Sure teams such as the Orioles and Red Sox may have a better record than the Tigers right now, but the Tigers lead baseball in run differential (+60, with St. Louis next closest at +53), team pitching fWAR (by a full 3.0 wins), are second offensively in baseball in RAR, wOBA, & wRC+, and have had the second best bullpen in baseball by RAR & FIP.

Four starters in the Tiger rotation are in the top 15 in fWAR (Anibal Sanchez 1st, Justin Verlander 6th, Max Scherzer 7th, Doug Fister 14th). That's right, Sanchez has been the best pitcher in baseball by fWAR and it's not even particularly close. Sanchez leads Felix Hernandez by 0.4 wins. And, of course, like clockwork, Miguel Cabrera is already one of eight 2.0+ win position players.

Regardless, all of this is to say that the Tigers have been a very good baseball team so far; arguably the best in the American League. Then again, in the results-based world of sports, the Rangers could stake a claim to that moniker as well. After all, the Rangers have the best record in the American League, the league's second best run differential, baseball's second fewest runs allowed, two starters in the top 10 in fWAR (Derek Holland 5th, Yu Darvish 8th), and have the best home and road record in the league. What makes that particularly noteworthy is that the Rangers have played ten more road games than home games thus far.

By second and third order wins, the Tigers and Rangers are #1 and #2 in baseball. These two teams have been the class of the American League for the last few years and that's certainly not changed this year. And that's what makes this an exciting match-up. We have arguably the two best teams in the American League in a four-game weekend series in Arlington with Yu Darvish and Justin Verlander on the mound to kick things off. For a mid-May series, it doesn't get much better than this. May the best team win.

Here's a breakdown of the pitching match-ups against the Midwest's best Detroit Tigers:

Advantage: Now here's a fun match-up. It's the guy everyone wanted the Rangers to trade for in Spring Training so Nick Tepesch wouldn't be in the rotation vs the guy the Tigers asked for (Tepesch, along with Leury Garcia) for Rick Porcello so the Tigers could start Drew Smyly and the Rangers wouldn't have to start Nick Tepesch.

Advantage: People like Anibal Sanchez have no business just suddenly becoming the best pitcher ever. That's not fair and I don't agree with it. Sanchez has been a fine 3.5-4.0-ish win pitcher over the last few years. That's all well and good. He's a good starter. But he's on pace for a 10.4 win season in 2013. That's unreasonable. It's time for the Rangers to step in and do something about this injustice (although, they probably will not).

So Nick Tepesch hasn't ever faced a lineup like the Tigers before. Justin Grimm has. Grimm faced the Tigers in his second career start last season on June 25. It was also Grimm's last start of last season. Grimm lasted an inning and allowed 8 hits, 6 runs, a walk, and didn't strikeout a single Tiger. It was ugly. And, especially given this particular pitching match-up, this one could be ugly too.

Advantage: So, one bit of good news: Every Tiger starter in this series is right-handed. I note this because I always forget that Doug Fister isn't left-handed. He seems like he would be left-handed and then he isn't. The bad news is that Doug Fister is good at throwing baseballs with his right hand so he should present as many problems as your average soft-tossing lefty that we hate so, so much.

Would you have guessed through eight starts that Derek Holland has been the Rangers' best starting pitcher? If you believed in The Year of Holland you might have. Here is a list of starters who have been better than Holland in 2013 (by fWAR):

And that's it. Those four people.

The Tiger offense should be a good challenge for Holland if he wants to prove to us that this is for real and not just a mirage like a humor-deficient young man wearing a green shirt to do a celebrity weather report. 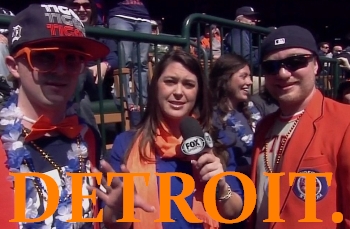