Texas once again faces its closest foe in the AL West. Oakland attempts to gain ground in Arlington while the Rangers look to keep on keeping on

Before we get into the AL Westy goodness, I would like to note that so far this season the Rangers have played 14 series. In those 14 series, they've gone 10-2-2. They've tied a series with the Twins and the Brewers and lost a series each against both of the awful teams from Chicago. The combined record of those four teams is 72-95. I don't know what that says other than maybe the Rangers just hate cheese and beer.

Last season, as you might remember, the Rangers didn't win the American League West; these Oakland A's did. A large reason for why that is, in my estimation, is that the Rangers went 27-30 against the AL West in the 2012 season. Were you to factor in the final Silver Boot Series and pretend the Astros were already an AL West combatant last season, the Rangers would have finished 32-31 against the West. Still, not great.

The Rangers went 8-11 against the A's, 9-10 against the Angels, and barely managed to top the Mariners in the season head-to-head 10-9. These A's went 33-24 against the West last year. Considering the different between the One-Game Wild Card Play-In Freak Show and a third consecutive AL West title was one game, it's easy to see how play against their mates in the West cost the Rangers.

In 2010, in the year of It's Time, the Rangers went 32-25 against the West to win the division for the first time in a decade. In 2011, in the best season of Rangers baseball, the Rangers absolutely demolished the West by going 40-17 against Seattle, Oakland, and Anaheim. It was a blood bath. It's no wonder then that the Rangers won the West by 10 full games.

In 2013, so far, the Rangers are back to handling the AL West. Currently, Texas is 16-6 against division foes. Of course, that's inflated a bit by increased play against Houston, but the Rangers are still 11-5 against their traditional three West rivals. Should the Rangers maintain that sort of pace against the division, it would go a long way toward helping them avoid the same sort of cratering they experienced in 2012.

Plus, you know, it's just fun to beat American League West teams and the Rangers should aim to keep doing it.

Since the A's are the closest competition in the West:

Here's a breakdown of the pitching match-ups against the perpetually weeds-lying Oakland Athletics:

Advantage: The haul from the Michael Young trade has come to bear fruit. Hopefully that fruit will be delicious like a ripened peach and not a gross one like a persimmon or a weird one like whatever a kumquat is. When Josh Lindblom throws his first pitch as a Ranger this evening, he'll end a string of every Rangers starter in 2013 having only ever pitched for the Rangers. That's because Lindblom has previously been a Dodger and Phillie. However, Lindblom has never started in the majors before so we can still say that every Rangers starter in 2013 has only ever started for the Rangers.

Imagine relaxing in a sauna after a tough, long week. You've got a good sweat going and your cares are melting away. You hear the door open and you open your eyes to see Bartolo Colon with nothing but a towel draped over his shoulder joining you. Now picture him on the mound in Arlington on a 90 degree evening with 70% humidity. It's the same thing. Put some trunks on or something, Bart.

Advantage: Yu's day on Tuesday = Yuesday. My modest goal for Yu in this start is for him to not allow a home run. I'm trying to hold back on my expectation that he strikes out 21 A's. 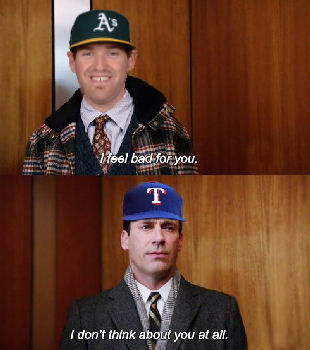 Advantage: So Jarrod Parker hasn't been good this season. But there's a danger here in assuming that will continue because Jarrod Parker is a pretty good pitcher and he's been pretty good the last couple of times out (3 runs in 6 2/3 innings against the Mariners, 1 run in 7 innings against the Royals). There's also the fact that Parker was solid to great against the Rangers last season (6 runs allowed in 20 innings in three starts, one of which included 8 innings of 1-hit baseball). Parker had been dealing with neck pain during his starts so it may just be that he's found a way to pitch through the issue and his early season struggles are behind him.

Nick Tepesch gets his first chance to face the A's and hopefully he does to A's fans what the A's endless supply of Nick Tepesch-esque pitchers do to Rangers fans. By that I mean, completely annoy them. 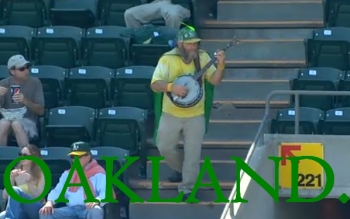