The Rangers are following up a 4-3 homestand, wherein they lost a home series for only the second time in 2013, by heading to Seattle to begin a five game road trip that concludes with a scheduled doubleheader against their newest Interleague rival, the Arizona Diamondbacks. The early season schedule has been filled with bizarre twists and turns but nothing is as strange as seeing a late-May 30 win Rangers team starting someone named Ross Wolf.

It's worth noting that in the series the Rangers lost, to the Oakland A's, the Rangers started Josh Lindblom and Wolf. To say the pitching staff has faced its share of injuries is like saying Mitch Moreland (new positional player team leader in fWAR) has been a bit of a surprise. It's an understatement.

But no one is going to cry for the Texas Rangers. In fact, the Rangers winning a game where Wolf and Neal Cotts combined to throw seven innings of one-run ball probably just makes teams want to cry themselves. In past years, the Wolfs and Lindbloms of the world would be getting 20 starts from here on out to see if they could stick as major leaguers and just get the Rangers through a season. Now, even the cannon fodder hits the target.

In this weekend series against the Mariners, the Rangers have Justin Grimm, Derek Holland, and Nick Tepesch going. It's humorous to me that Grimm and Tepesch are a new sort of normal. If you were to have stated in February that getting Tepesch back from a blister would feel like a win, you'd have gotten sideways looks; maybe even in Round Rock. If you were to have stated even in mid-April that you were looking forward to a start from Grimm, you were probably Justin Grimm's parents.

But this is it. This is the sort of depth that Jon Daniels and the Rangers have been preaching for and attempting to amass. These are the sort of pitchers that the Rangers couldn't find for the life of them last season (and in some cases, like Grimm, it was pitchers who just weren't quite ready) when they turned to the likes of Roy Oswalt. Without Colby Lewis, Alexi Ogando, Matt Harrison, and Martin Perez, the patchwork has done a remarkable job.

Here's a breakdown of the pitching match-ups against one of the contributing factors for depression in the Pacific Northwest, the Seattle Mariners:

Advantage: This will be Justin Grimm's third crack at the Seattle Mariners this season. In his season debut on April 11, Grimm allowed 2 runs in four innings at Safeco in a game where the Rangers beat Felix Hernandez. Ten days later, at The Ballpark, Grimm went six innings, allowed a run, struck out nine Mariners and picked up his first win of the season.

This will be Joe Saunders' third crack at the Texas Rangers this season. On April 13, Saunders went seven shutout innings at Safeco to harken back to the gruesome October Wild Card start. On April 19, however, the Rangers finally did to Saunders what they should have done all along; Saunders allowed 7 runs in 4 2/3 innings at The Ballpark to expel the nasty ghosts of Saunders dominance.

Advantage: Anyone pitching against Felix Hernandez is outclassed. Anyone. Everyone. Maybe except for Clayton Kershaw. But other than Yu Darvish, of the current rotation, Derek Holland is the guy you'd like to see try to match zeroes with The King. The Rangers sort of have a long history of pulling out wins against Hernandez that they have no business winning. Like when Grimm came up to replace Matt Harrison in April and the Rangers won even though Grimm lasted only four innings.

Of course, the Rangers also have a long history of Felix having games where he shuts them down and sends the offense into a funk for a week. He's that sort of pitcher. He's a slump-creator. The key, I feel, is to let the Mariners do their brand of magic where they don't score at all and then hope someone hits the one mistake Felix throws up there all game.

Advantage: Hisashi Iwakuma has been a great story for the Mariners. After pitching out of the 'pen for most of the 2012 season, Iwakuma got his chance to start in the second half, pitched well enough that he was penciled into the rotation heading into this season, and earned a spot in spring training. This season, Iwakuma has been a success in the rotation for the Mariners and makes up a formidable No. 2 in a 1-2 punch with Felix Hernandez. Unfortunately for the Rangers, they'll be getting that 1-2 punch this weekend.

It doesn't help that these games will be played at Safeco. If you thought Joe Saunders had favorable home/away splits, Iwakuma has been nearly untouchable at Safeco this season. Opponents are hitting .146 off of Iwakuma at home, he walks less than a one batter per nine, and therefore has a home WHIP of .58. Iwakuma has a 1.84 FIP in Seattle compared to 4.63 in parks across the rest of the league. The Rangers faced Iwakuma in Seattle on April 12 and Iwakuma allowed a run in 6 2/3 innings.

As for Tepesch, the last time he faced the Mariners he was hit by a Jesus Montero line drive in the second inning on LSB tailgate night and was replaced by Derek Lowe. Lowe then threw four hitless innings in his best outing as a Ranger. Neither Jesus Montero or Derek Lowe are in the big leagues anymore. The baseball season is long. 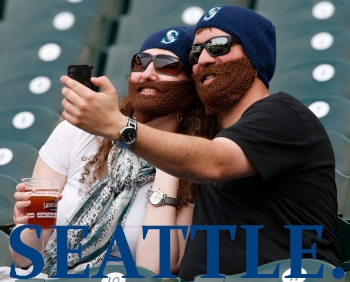