Whenever I think of the Royals, I think of two things. 1. Rusty Kuntz. 2. George Brett. The former being because I was a big fan of when Keith Olbermann and Dan Patrick did Sportscenter and always made sure to note where Dick Trickle finished in NASCAR races, and the latter because the Royals just haven't really done anything of note since Brett was around.

Well, now he's back. Yesterday the Royals announced that Brett will be the team's interim hitting coach for the rest of the season.

I was at Arlington Stadium for George Brett's final game as a Major League baseball player. That was Oct. 3, 1993. Kevin Appier faced off against Steve Dreyer. It was supposed to be Appier vs Nolan Ryan but Ryan's arm finally gave out after 27 seasons about ten days beforehand in Seattle. The last batter Ryan faced was now Ranger hitting coach Dave Magadan, but Ryan's final game as a professional was that game against Brett's Royals. To add to the sense of finality, it was also the final game ever played at old Arlington Stadium.

I'll never forget Brett's final plate appearance, a single up the middle. The Rangers had already sewn up second place in the West before that final series began against third place KC. So, the series was more about a celebration of Ryan, Brett, Arlington Stadium, and The Ballpark nearing completion across the street.

I remember after the game ended, a 4-1 loss, they showed Ryan and the Rangers deliver home plate to The Ballpark on the old crappy Jumbotron.

But Brett's last at-bat is etched in my mind because I'm certain to this day that Ranger shortstop Manuel Lee let him have one. It was the top of the 9th, the Royals led 2-1, and Brett hit a ball to the shortstop side of second base off of Tom Henke and Lee didn't even seem to make an attempt. Maybe the ball was hit too hard. Maybe I'm giving Lee too much credit here. But I always thought that it was a cool moment.

George Brett was, obviously, a great player. And the Royals have had so few of them since Brett retired. Every Royals prospect though the years since has had the burden of being called "The Next George Brett." In fact, third base prospects the likes of Sean Burroughs and Hank Blalock have been sunk while trying to live up to the memory of Brett. But there will never be another George Brett.

Maybe with Brett back in uniform to tutor the likes of Eric Hosmer, Mike Moustakas, and Salvador Perez the Royals can finally get out from under his shadow by living within it once more.

Here's a breakdown of the pitching match-ups against the Pittsburgh Pirates of the American League:

Advantage: You never forgive a pitcher who ruins your birthday. The Rangers were up two games to one on the Tampa Bay Rays in the 2010 ALDS when Wade Davis took the mound against Tommy Hunter in Game 4 on Oct. 10, 2010. The previous night - LSB's first ever Tailgate - the Rangers failed to finish off their first playoff series win in franchise history, but we had high hopes that the Rangers could best Davis and send the Rangers to the ALCS for the first time. Davis went five innings, allowed a couple runs, and got the game to the Rays' deep bullpen to send the series back to Tampa. It was hours later that the Rangers announced that they weren't retaining Josh Lewin. That was clearly also Wade Davis' fault.

Davis has gone on to have another year of being a mediocre starter in Tampa, then a pretty good relief pitcher for the Rays last year, and now, as a part of the James Shields/Wil Myers trade, a third of a season as an average starter for Kansas City.

In the meantime, since 2010, Derek Holland has gone on to experiencing up and down years as a starter for the Rangers. It's weird to remember now that during that run in the 2010 Postseason, Holland was the one pitching out of the 'pen. He was beaten out for a spot in the playoff rotation by Hunter. Luckily for us, the Rangers, and maybe a belated birthday wish, this looks like an up year for Holland.

Advantage: The biggest piece in the Meyers trade for the Royals has been a big thorn in the side of the Rangers. Utilizing a changeup that seems designed to baffle Texas, for his career, spanning 81 innings, Shields has allowed only 25 runs against the Rangers. That includes five runs in 22 innings spanning three starts last season. Four of those runs came in an April start. In a span of about ten days in late August-early September, he allowed one run in 16 innings. That included a complete game shutout on September 9 last year.

Shields has been as advertised for the Royals following their controversial acquisition of Big Game James over the winter. The Royals turned top corner outfield prospect Wil Myers into two starters and Elliot Johnson in an effort to go for it. Shields has held up his end of the bargain. He's pitching about as well as he always has. The problem is, as it was the problem at the time of the trade, the Royals kind of stink otherwise. It has to be disappointing to anyone in KC to see Shields sitting at 2-6 when he's pitched well enough to have a better record.

Nick Tepesch, too, has pitched better than a 3-4 record would surmise. Most recently, for example, Tepesch allowed only two runs in his start against Seattle but that was good enough for a no decision as those two runs came on a two-run home run that tied the game in the late innings. But, after having a stretch in early May where he struggled against both Chicago teams, Tepesch has had three straight starts where he's allowed two or fewer runs.

Advantage: Yu Darvish was back to brilliant last time out. Darvish had 14 Ks in 7 2/3 innings as he rediscovered his sick slider and fastball command. Unfortunately, the Diamondbacks got to Yu after their first few hitters and their last few. The Diamondbacks were up 2-0 after three batters when they attacked first pitch offerings and were able to tie the game in the 8th when Didi Gregorius got a 2-0 cutter that found the one area around the plate that he hits for power. With Trevor Cahill allowing only four runs (still something of a disaster for him against the Rangers), the D-Backs were able outlast the Ranger ace.

Maybe this will be the start were Yu doesn't allow a home run? The last time Darvish didn't allow a home run in a start was back on April 24 against the Angels. He started the season allowing no dingers in his first five starts and since then he's allowed them at a Colby Lewisian rate of nine in his last six starts.

Ervin Santana is no stranger to allowing the long ball himself. After allowing a league leading 39 home runs with Anaheim in 2012, Santana has allowed 13 in 2013 already. That includes seven in his last two starts. Santana pitched against the Rangers thrice last season. In those three starts, he allowed 15 runs in 9 1/3 innings while giving up seven dongs. 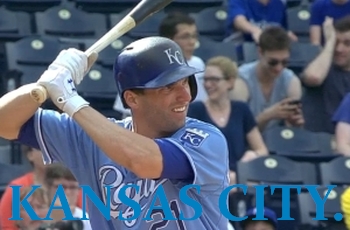