Series Preview: Texas Rangers @ Milwaukee Brewers - A Ghost, a Cup, and a Car on the Field

From that car on the field, to Colby Lewis' ghost, the Rangers have a brief and recent history of things being weird in Milwaukee

Share All sharing options for: Series Preview: Texas Rangers @ Milwaukee Brewers - A Ghost, a Cup, and a Car on the Field

The last time the Rangers were in Milwaukee, a bunch of weird things happened and it all started with a car on the field. The Rangers were 33-27 and in first place in the American League West by a game and half on June 11, 2010 when they began a three game interleague series against the Brewers in Milwaukee. Rich Harden was on the mound and that meant consternation because Harden was terrible in 2010 -- as difficult as that is for me to admit.

Harden didn't disappoint in his ability to disappoint and the Rangers lost the opener 6-2. During one of the late innings of this already frustrating game, the contest was delayed because the Brewers had wheeled a car onto the field for some sort of promotion and then couldn't get it off in time for when the game was supposed to continue. So we were graced with this image of a car just idling in front of an outfield gate: 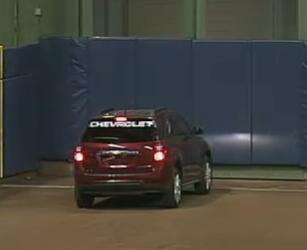 And man, that annoyed the heck out of me. The loss dropped the Rangers to 33-28 and only a half game lead in the West. But something changed on that day. I believe now that the car on the field was a omen for things to come for the 2010 Texas Rangers. Perhaps it wasn't the mantis that propelled the Rangers to their first World Series appearance. Maybe it wasn't the Claw and Antlers, either. Maybe it was because the Rangers were pretty good. But most likely, it was the car on the field that night in Milwaukee.

The next day the Rangers won 4-3 in a game where they led 4-0 going into the 8th inning before giving up a run in the 8th, and then two in the 9th. The final out came when Josh Hamilton caught a lazy fly ball in left with the tying run on third. However, since nothing in that series was normal, a trick of the camera angle, and a paper cup on the warning track, made it appear as though Hamilton had misplayed the ball (something we'd see two years later) and allowed the Brewers to tie the game: 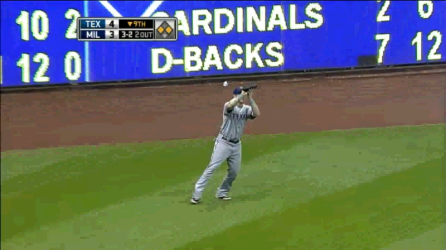 Cars on the field. Cups on the warning track. Ghosts in the hotel? The series finale saw Colby Lewis continue to make Jon Daniels look like a genius when he out-dueled Yovani Gallardo in a 7-2 victory. Before the game, however, word came out that Lewis had been spooked by a spook at the Pfister Hotel in Milwaukee where the team was staying. 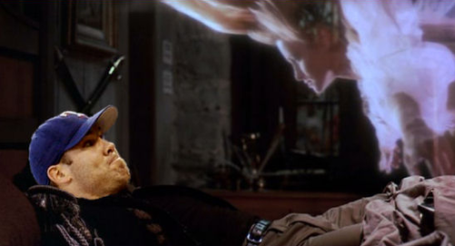 According to legend, and this website about paranormal activity in the Milwaukee area, Colby was so afraid that he "spoke with the team chaplain about it the next day," canceled a radio appearance, and has never spoken of it to anyone ever again.

Is the car on the field portent merely a coincidence or is it a forgotten moment of lore that needs be remembered? Unlike that car, however, the Rangers still haven't gotten through the gate. The Rangers remain on the field.

Here's a breakdown of the pitching match-ups against the team that I sort of wish they had come back to the American League instead of the Astros:

Grimm has been very good so far this season but he's faced the 18th best offense twice (Seattle), the 22nd best offense (Minnesota), and the 29th best offense (Chicago White Sox) in baseball. So Grimm hasn't really been challenged by a difficult hitting team and we're also working with a sample of 23 2/3 innings. The Brewers are currently the 8th best offense in baseball thus far so they'll present Grimm with an opportunity to prove himself against a team that can hit the baseball a little.

Advantage: How much electronic ink was wasted writing about Kyle Lohse and the Rangers rotation depth this offseason? How many poor baseball writers blistered their fingers on their keyboards writing on what a logical pairing Lohse was for the Rangers? I'll assume hundreds. Lohse has been pretty good so far this season but he's been about as good as Justin Grimm has been good. He also costs like 22 times as much this season, is 34, has another couple of years on his deal, and would have cost the Rangers a first round draft pick. But there I go, blistering up.

Derek Holland finds himself littered all over the leaderboards among the top pitchers in the game so far this season. I want to believe. I want to believe that this is the true Year of Holland. Holland makes me believe when he does things like shut out the Red Sox over eight innings or when his changeup continues to be among the top 10 among starters in baseball. Please be real, Year of Holland. 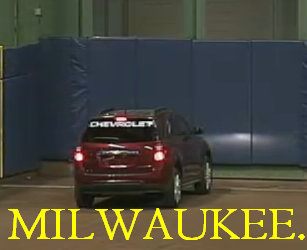