The Rangers return to the most scene of the most deflating moment in franchise history looking not only to exorcise the ghosts of a bygone Fall Classic, but also continue their trek toward a reunion in October

I'm currently a little distraught. Not because the Rangers are returning to the place that almost made me question my sanity, and the fabric of reality on October 27, 2011, but because the Rangers have sent Yoshinori Tateyama to the New York Yankees. I'll miss you, Yoshi! 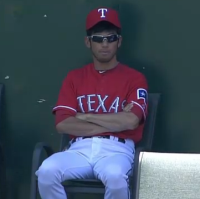 True story: Yoshi saved the 2011 season. Remember when the April/May bullpen had the likes of Mason Tobin, Brett Tomko, Cody Eppley and Ryan Tucker in it and was terrible? Yoshi came up May 24, 2011 and stabilized the middle innings until the trade deadline acquisitions of Koji Uehara and Mike Adams transformed the 'pen. I'll never forget what Yoshi did for the best team in franchise history.

But back to the where Yoshi led the Rangers: The 2011 World Series.

Maybe this series is going to be really painful. I'm sure we're going to see a ton of replays of things we don't want to see. A lot of David Freese. A lot of Gulf and Nelson Cruz. A lot of Cardinals in each other's arms. A lot of head-hung Texas Rangers. It will be easy to forget, as an entirely different Rangers team plays an entirely different Cardinals team -- each still good -- that a ton of awesome things happened in that World Series that weren't Game 6 and Game 7.

Here are some moments from the 2011 World Series that make this series OK to remain proud to be a Rangers' fan:

Possibly the greatest defensively play in franchise history. An absolute miracle of a baseball play. It's difficult to remember now, but the Cardinals score another run in a 1-0 game if Elvis + Ian don't make that play. And that led to this:

Rangers even series 1-1 with a 9th inning comeback.

That game was started by Colby Lewis. Can we appreciate again what a beast Colby turns into in October? For his career, in two postseasons, Colby is 4-1 with a 2.34 ERA in 50 innings of October baseball. That includes the win in the clincher of the 2010 ALCS, the lone win for the Rangers in the 2010 World Series, a victory over David Price in the 2011 ALDS, and two gutsy starts in St. Louis against the Cardinals.

If not Colby, it was the Postseason of NAP-O-LI! in The Year of the Napoli in the World Series of Napoli. Had the Rangers held on, Mike Napoli would be our World Series MVP.

Speaking of Game 5, it was every bit as classic as Game 6. Only the Rangers prevailed in this one. It was a game that featured such a raucous crowd at The Ballpark, that Cards' manager Tony La Russa couldn't correctly manage his bullpen and mistakenly left a left-handed Marc Rzepczynski in to face Napoli (keeping in mind that Napoli obliterates lefties) when he failed to get a right-hander up in time because of miscommunication with his bullpen.

The Cardinals took a 2-0 lead in the 2nd inning of Game 5 with Chris Carpenter on the mound. Here's how the Rangers got on the board:

Mitch Moreland hit a huge home run in a World Series for the second time. Then Adrian Beltre, in the first World Series of his career, tied the game in the 6th with maybe my favorite home run ever: 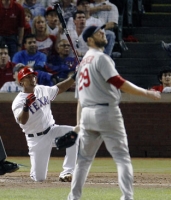 Of course, there was one dong that could have been better. Josh Hamilton truly became The Natural in the 10th inning of Game 6 when he hit a two-run home run to put the Rangers back on top. Many months latter, I wrote this about Game 6 and that home run:

Only my sister actually witnessed the mental and physical trials I went through during Game 6. I howled when Beltre hit the go-ahead shot. I howled like I was trying to summon every Rangers fan to me. I absolutely believed in that moment that the Rangers would win the World Series. And I still believed it for many of the moments that followed.

I literally lost my mind after Nellie couldn't grab Freese's two-out triple. My brain escaped from the prison that is my head and went to join wherever it is that socks disappear to in the dryer. It became too much for my sister. She's a Rangers fan but not like we're Rangers fans. But she couldn't watch anymore. To her, a novice baseball fan, watching me watch Game 6 was like I had put on Human Centipede 2.

After Josh Hamilton hit the home run in the 11th, I fell apart. I screamed in perhaps the must guttural and real moment of my entire life. And then, as Hamilton rounded the bases, I sat there sobbing and just making noises that no human should be able to make. And she came running back into the room and was like, "It'll be okay!" Then she looked at the TV and was like, "Oh, they're winning! Oh my god! They're winning!" And I just looked up at her and blubbered out words that were probably, "I................know................"

And then they didn't win. But at least by then I was comfortably numb to all outside provocations as I escaped to the comforts of despair. Then I ate cold chicken wings and glowered as I watched There Will Be Blood.

So to any lurking Cardinal fans: That's what it felt like. You've lived a charmed baseball existence. But just know, the first Rangers' World Series Championship will be far sweeter for me than any Cardinal title that you've ever witnessed.

In the end, the Rangers didn't win the World Series. But it was a true Fall Classic that will be remembered forever. One day, when the Rangers do finally win one of these things, we'll be able to look back on October 2011 as the very special moment in time that it was. The Rangers finally had lore.

Here's a breakdown of the pitching match-ups against baseball's best team through mid-June and forever tormentor of our dreams - the St. Louis Cardinals:

Advantage: I'll refrain from saying that I don't know who Tyler Lyons is because the last few times that I've done that when discussing an opponent's starter, the unsuspecting suspect has pitched a good game against the Rangers.

Derek Holland is having a great year but he's had a couple of rough outings of late. In two starts in the just completed 11-game homestand, Holland allowed 8 runs to the Indians and Blue Jays while giving up 19 hits. In fact, in his last four starts, Holland has given up 36 hits. I've been impressed all year by Holland's increased K rate and improved walk rate, but he'd do himself a service if he could limit the base hits. But, sure, it's that easy, right?

Advantage: It wasn't terribly long ago that Shelby Miller and Martin Perez were among the top pitching prospects in baseball. So far in 2013, Miller has lived up to his lofty expectations while Perez is trying to establish himself. While Miller has become one of the bright young pitchers in baseball, Perez will be making just his second start in 2013, and seventh start of his big league career. It's worth noting, while Perez has yet to have success in the Majors, he's pitched exceptionally well in Triple-A in his most recent stint.

In Perez's last five starts for Round Rock he's allowed three runs in 31 innings while striking out 23 batters to only 7 walks. That amounts to Perez's best string of starts in Triple-A since he reached that level in 2011 and has earned him another look in the Ranger rotation. One of these days, he's going to stick and be in the rotation for ten years.

Advantage: LOL. Yeah, no. Sorry, Nick. Adam Wainwright might be the best pitcher in baseball in 2013. Nick Tepesch is a rookie having a terrible June. Stranger things have happened, though. I mean, the Rangers won a game where Justin Grimm pitched against Felix Hernandez this year. And the Cardinals don't even have Nick Punto anymore so it's possible that the Rangers could pull this one out. 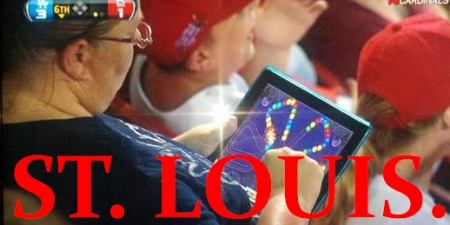 Rangers' Record vs. St. Louis: N/A (You know what happened the last time these teams played)