Weird factoid: The last time the Rangers won a game in which they did not trail at any point was on June 5 in Boston. All eight of the Rangers' most recent wins, including those in the recent five game win streak, have come via the comeback.

Two thoughts on why that is: The offense, as it is currently constructed, utilizes the tactic of wearing down the opposing starter until they eventually crack during the second or third time through the Ranger order. By that time, the Rangers trail -- given the recent trend of Ranger starters allowing early runs -- before getting to the starter or opposition's bullpen late.

The bullpen has be stellar all year but especially of late. During the five game win streak, the Rangers' 'pen has allowed only two earned runs in 13 1/3 innings. This has allowed the Rangers to facilitate comebacks by keeping their opponents off the board through the late innings as they eventually make up the difference.

While that combination has worked out for the Rangers lately, it's likely not a great strategy against the Yankees simply because they can match the Rangers with a great bullpen. After all, the Yankees and Rangers have been the best in baseball at protecting leads. Each team has just nine losses in games where they've led at some point. The next closest team to that mark is at 13 losses.

This series might just end up being about which team can get on the board first and build on a lead. Especially since the recent comeback-in-every-game model isn't really sustainable. But, at least these Rangers have shown their resolve during a period in the season where they could have caved otherwise.

Here's a breakdown of the pitching match-ups against every day is Old-Timers' Day for these New York Yankees:

Advantage: Yu Darvish still hasn't won since May 16 even though he's generally pitched as well as ever. His last outing against the A's was maybe his worst since April, however. Looking to bounce back, and get back in the win column, Yu will be making his first start in New York which is, apparently, a big deal. You're nobody until you've beaten the Yankees at Yankee Stadium, I suppose. That said, this isn't the first time Yu has faced the Yankees.

On April 24, 2012, Darvish started against the Yankees at The Ballpark and gave us a glimpse of an ace for the first time. Yu went 8 1/3 innings, allowed zero runs, struck out ten Yankees and showed exactly the kind of pitcher the Rangers hoped they'd acquired from Japan. That was a big start for Yu because after a couple of starts to begin the year, where he had scouts calling him the second coming of Dice-K, Darvish showed he had the potential to dominate a Major League baseball game against elite competition.

Opposing Yu that night was Hiroki Kuroda. Kuroda allowed only two runs in 6 2/3 innings. But his best outing against the Rangers came later that year, on August 14, when he tossed a two-hit complete game shutout against Texas at Yankee Stadium. Kuroda has been the Yankees' best starter in 2013 so this should be a helluva matchup. This will be only the 11th time in major league history that two Japanese-born pitchers will start against each other.

Besides falling under the spell of Derek Holland's wackiness, Justin Grimm was last seen tossing a decent outing at the Oakland A's in the crucial third game of their four-game series last week. Grimm held the A's off the board until allowing a two-out three-run dong to Chris Young in the 5th inning for the only runs he allowed.

But, overall, besides that mistake pitch to Young, Grimm kept it together in what was his best start in June to date. He'll look to build on that start against the Yankees in his first taste of the Big Apple. Of course, the last time he made a first start under the bright lights against a storied franchise, he had his worst outing of the season.

Remember when we thought we were rid of Andy Pettitte after Colby Lewis made Game 7 of the 2010 ALCS a moot proposition and left Pettitte to mosey into retirement? Well, just kidding. It's never that easy. After a year off in 2011, Pettitte returned mid-season last year and is back for more this year. This is the first time he'll have faced the Rangers since Game 3 of that ALCS.

Besides being wacky, Holland was last seen tossing his best five innings of June at the Cardinals after a shaky first couple of innings. Lately, Holland has come out strong in the first few innings before running into trouble in the middle innings. Holland reversed that trend on Friday when he allowed three Cardinal runs before collecting the first out of the game. Holland settled down and retired the final 12 hitters he faced and looked great doing so.

So, in the crazy world of Derek Holland, we'll probably see four no-hit innings before he allows five Yankee runs in the 5th inning.

Remember when Phil Hughes was an untouchable prospect that the Yankees held onto through endless trade rumors? It seems like Hughes has been around forever. And even though he's made 117 starts with the Yankees, he's never really been anything more than serviceable. He's had some stellar outings over the years but he's never really reached the heights of his top prospect classification from years ago. In some ways, he's been like the right-handed poor man's Yankee version of Derek Holland only without the Dumb and Dumber tux. 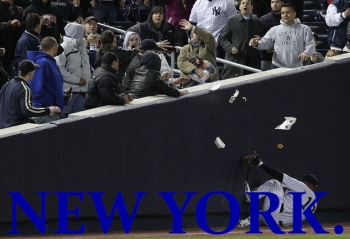