Share All sharing options for: Series Preview: Texas Rangers @ Toronto Blue Jays - Park Within The City Within a Park

Of course, with half of the Rangers on one leg, Texas would be staring down their only meeting at Toronto's demented cement ball yard on the season. Lance Berkman proved himself not a first baseman last evening. Say hello to Chris McGuiness, who was called up to replace the disabled Mitch Moreland. Adrian Beltre isn't fit to field at the grueling Rogers Centre. So, Leury Garcia or Jeff Baker will man third in Beltre's stead.

Ian Kinsler is out. The Rangers don't have a catcher worth spit. Nobody is hitting. Michael Kirkman hasn't been DFA'd in any of the dozens of times that I've checked in the last hour. And, overall, the bullpen is overworked three games into a twenty game stretch with no off days.

It sounds bad. But it could be worse. It could be the Toronto Blue Jays.

If the Angels didn't win another offseason title over the winter, it's because the Blue Jays took their crown. Alex Anthopoulos was lauded for finally getting Rogers Communications to loosen the purse strings and allow him to go for it. It, of course, being contention in the American League East. And with the Yankees looking old, the Red Sox looking like a rebuild-on-the-fly effort, the Orioles looking like a 2012 fluke, and the Rays perpetually looking for the missing piece on the cheap, there was reason to believe 2013 could be the year.

Anthopoulos acquired the following impact players via signings, trades and transactions for the 2013 season: Maicer Izturis, Emilio Bonifacio, Esmil Rogers, Melky Cabrera, Jose Reyes, Josh Johnson, R.A. Dickey, and Mark Buehrle. Combined, those players have been worth 0.4 fWAR. In other words, the big offseason coup that made the Blue Jays a trendy World Series pick in Dec.-Feb. has been worth as much as Munenori Kawasaki by himself in the standings in April-June.

Of the biggest names, Reyes was doing well for the Jays before he got hurt early in the year, Cabrera has done nothing to dispel the notion that his career half-year last season was PED-driven, Buehrle has been bad (4.74 FIP) while readjusting to the American League, Johnson has yet to win a game for the Jays, and NL Cy Young knuckler Dickey has a 4.67 FIP as he misses those NL lineups every night. Yikes.

So, while there's plenty of concern for the Rangers in this tough stretch, just take heart in knowing that the Rangers didn't win the offseason. It's hard enough to win April-October without adding a few more months at the start.

Here's a breakdown of the pitching match-ups against the land of :07 start times and center field hotel sex:

Advantage: It's amazing how similar the results for Nick Tepesch and Justin Grimm have been so far this season. Both are 1.0 fWAR pitchers on the year. Grimm has a little better K rate, but Tepesch induces more ground balls (56.7% to 43.7% GB%), and they have a nearly identical walk rate. Grimm has been a little unlucky this season as far as his BABIP and LOB% goes but a lot of that stems from his previous outing where the Red Sox just drilled anything he threw up there.

If one of them ends up getting the boot from the rotation should a Colby Lewis return or the front office adds a starter, I honestly don't know which one I'd prefer to stay. But somehow I know Nick Tepesch isn't worried about it. Somewhere he's preparing for tonight's start by nodding patiently at whomever is speaking to him and working away at a stick of gum.

It seems like Esmil Rogers was the potential haul of a dozen aborted Michael Young trades to Colorado every winter for half a decade. Now Rogers has bounced to Toronto via Cleveland and has pitched well out of the 'pen of late. He's started one game, on May 29 against Atlanta, but hasn't lasted for longer than 3 1/3 innings in any of his 24 appearances on the year. Naturally, that means he's in for a season high in innings and strikeouts against the Chris McGuiness-led Ranger offense.

Advantage: Mark Buehrle has given the Rangers more fits over the years than people trying to spell Mark Buehrle. In addition to tossing a no-hitter against the Rangers in 2007, Buehrle has used his being a crafty lefty to torment Texas for over a decade now. In fact, of the non-AL Central teams, which faced Buehrle when he was with the White Sox several times per year, the Rangers are the only other team that Buehrle has beaten over ten times.

Buehrle is 12-5 against the Rangers over his career. Of course, the Rangers haven't had a crack at Buehrle in a couple of years now, so maybe they'll even the score a little now that Buehrle is kind of terrible.

Remember when it seemed like a foregone conclusion on the rumor mill that the Blue Jays had won the Yu Darvish posting sweepstakes? Suckers. It would make me a happy person if Yu Darvish dominated the Blue Jays for 15 years as a Texas Ranger.

Advantage: Jayson Stark predicted that Josh Johnson would win the AL Cy Young award before the season began. That's going about as well for this Stark as House Stark at the Red Wedding. The problem with Johnson, as always, isn't that he's bad when he pitches - though he hasn't been great when he's been on the mound in 2013 - it's that he can't stay healthy.

Johnson came off the DL on June 4th and pitched a solid game against the San Francisco Giants but he's made only five starts in 2013 and pitched only 26 2/3 innings. Yu Darvish, for example, has tossed 81 1/3 innings this year. If Johnson is truly healthy on Sunday, he could give the Rangers problems simply because getting up on the hill is most of the battle.

Justin Grimm had his worst start since June 25, 2012 against Boston on Tuesday. Grimm went 1 2/3 innings and allowed 8 earned runs, walked three, and struck out a season low one batter. Before that game, Grimm had three consecutive starts where he went at least six innings and allowed three runs or fewer. I'm going to say that he was nervous about pitching at Fenway for the first time and that Rogers Centre doesn't hold quite the same sort of mystique. 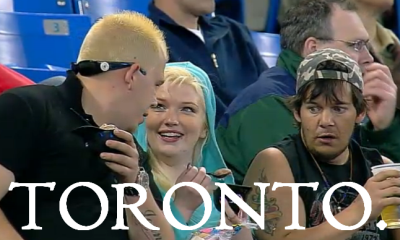