The Rangers open the second half of the baseball season against the Baltimore Orioles. The pitching match-ups look similar to the ones from a week ago except maybe Matt Garza will be on one of these teams

It's 1:14 PM as I write this and I'm currently distracted by Matt Garza rumors. Garza isn't a Ranger yet, but it's looking more and more like he probably will be if twitter rumors are to be believed. Should the Rangers acquire Garza today, he'd likely be penciled in to make his Ranger debut on Saturday instead of the currently scheduled starter -- Ross Wolf.

Obviously, you'd rather have Matt Garza starting games for you than Ross Wolf, but it'll be interesting to see what bushel of prospects the Rangers send over to the Cubs if this deal does indeed go down. And by interesting, I mean scary.

Garza would be, at most, a #3 starter for the Rangers. Garza is a free agent after this season. And the Rangers would not be eligible to receive draft compensation after the season if they acquired Garza. If the prospects involved are pliable, however, Garza could be a solid acquisition simply as a rotation stabilizer. But if the Rangers overpay, they're overpaying for a guy who likely doesn't put them over the top.

If nothing else, should the Rangers trade for Garza, it might signify that the team doesn't expect much from Colby Lewis or Matt Harrison this season, and that they potentially want to stem the tide of a battered rotation before the second half of the season really gets under way. Either way, on Saturday, we'll either watch Matt Garza try to live up to the promise of our beloved former prospects, or we'll get to see the continuation of the great Ross Wolf story.

But, without dealing in the maybes of Garza, the Rangers open the second half of the 2013 season against the Baltimore Orioles. You might remember them as the team the Rangers played like a week ago. At lot of the pitchers you'll see this weekend are some of the same pitchers you saw during the Rangers series split in Baltimore.

Craig Gentry and Jeff Baker were missing from that series, and for the last month, but they both will be activated from the disabled list before tonight's game which should help to improve the bench situation. Who would have guessed on March 31st that Jeff Baker would have been the most critical free agent signing for the Rangers over the off-season?

Lest we forget, before an over-exuberant Ranger player sent Baker down with a bum high-fiving thumb, Baker was absolutely raking against left-handers to the tune of an OPS of 1.491 and a hilarious wRC+ of 288. That comes with the standard small sample caveat of a bench player but Baker was hired to hit lefties and that's exactly what he was doing. Here's hoping that Baker is as we left him.

With Baker and Gentry out, the Rangers had been forced to keep too many Moreland/Murphy/Martins in the lineup against left-handers. And while Gentry hasn't hit much this season, the Rangers can rely on him to provide stellar defense and possibly provide a boost to their atrocious baserunning.

This is the first step in the Rangers getting healthy again. With Yu Darvish and Alexi Ogando expected back for next week's series against the Yankees, the Rangers are getting closer to resembling something close to a full squad. Of course, there's still a lot of baseball to go so let's all cross our fingers that the Rangers stay nearly-healthy and that JD keeps Jorge Alfaro out of the Garza deal.

Here's a breakdown of the pitching match-ups against Chris Davis and the Hindsight Avengers:

Advantage: Last time out, lefty Wei-Yin Chen went seven innings against the Rangers and allowed a run on three hits. He didn't have to deal with Jeff Baker, though. The last time lefty Derek Holland took the mound he was out-dueling Max Scherzer by going seven innings of one-run ball in a win against the Detroit Tigers. Holland's start before that was against Baltimore where he allowed three runs in 6 2/3 innings and made Chris Davis look foolish (0-4 with four Ks and a BB).

Give me the Dutch Oven.

Advantage: Let's pretend that Ross Wolf will actually start this game as scheduled and assume that Miguel Gonzalez is Miguel Angel Gonzalez Martin and not Miguel Alfredo Gonzalez. Obviously the advantage here goes to the Orioles simply because their Miguel Gonzalez has gone nearly two months since allowing more than three runs in a start and Ross Wolf was one "no" from an organization away from joining his Pa on the bean farm in Illinois.

It should be noted that Wolf faced these Orioles the Thursday before last and allowed only two runs (on solo home runs) in six innings in a game that the Rangers lost to Baltimore and Gonzalez 3-1. Hopefully, if Wolf makes this start, he gives the Rangers a similar type effort and the Rangers score a few more runs off Gonzalez for him. I root for Ross Wolf.

Advantage: Chris Tillman has to have won the Annual Jose Rosado Worst All-Star Selection Award, right?. But Tillman is 11-3 so he must be doing something right, right? I'm not bitter about Derek Holland being left off the All-Star roster, right?

Tillman is the only pitcher that is scheduled to start in this series that didn't pitch in the series last week in Baltimore. The last time Tillman faced the Rangers was back in August of 2012 when he allowed three runs in 6 2/3 innings of a Rangers loss. That start came against then-Ranger Scott Feldman who is now an Oriole. To bridge the game to closer Jim Johnson, former Rangers Darren O'Day and Pedro Strop pitched. The Orioles really are Rangers East.

Martin Perez is trying to bounce back from a tough start in Detroit where he allowed five runs (including three solo home runs) in 5 2/3 innings pitched. Before that game, however, Perez was enjoying a run of five starts where he allowed three runs or less. That run includes a start in Baltimore against these Orioles where Perez allowed two runs in six innings in a Rangers win. 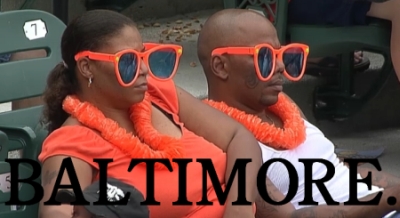 Rangers' Record vs. Baltimore: 2-2 (All at Camden Field)