By ghostofErikThompson@apoplecticfittz Jul 2, 2013, 8:00am CDT

It's 8:00 AM on July 2 so that means at this very moment the Rangers could be signing some 16-year-old kid with a name like Yeyson Yrizarri, Greifer Andrade, or Micker Adolfo Zapata. The first day of the International amateur signing period is here. The player acquisition ride never ends.

Todd Wills previews the week ahead which will see the Rangers face the Seattle Mariners and Houston Astros at The Ballpark.

Drew Davison looks forward to July by looking back at the Rangers' June and writes that the Rangers are ready to thrive now that they've survived.

Wills writes that the Rangers' recent resurgence has been sparked by an influx of young players such as Jurickson Profar, Leonys Martin, and Engel Beltre.

Behind the DMN paywall, Evan Grant has a lengthy piece that tells the remarkable story of Neal Cotts; an older player who has helped the Rangers to navigate through a sea of injuries after years of dealing with his own.

T.R. Sullivan and Greg Johns join forces to write about the bro-love between ex-teammates Felix Hernandez and Adrian Beltre.

On the trade deadline front, Jon Heyman examines the market for Miami Marlin starter Ricky Nolasco and mentions the Rangers as a suitor. It sure seems like Nolasco has been linked to the Rangers for forever now.

Master Tesfatsion takes on Notebook duty and reports that Joakim Soria will make his next appearance in Double-A Frisco and could debut with the Rangers in a week or so.

Davison's notes tackle the All-Star Game vote standings wherein no Ranger is particularly close to getting voted in, Soria nearing his big league return, and ESPN bumping the July 22 game against the Yankees to a 6:05 PM start time.

Lastly, guess what time it is... 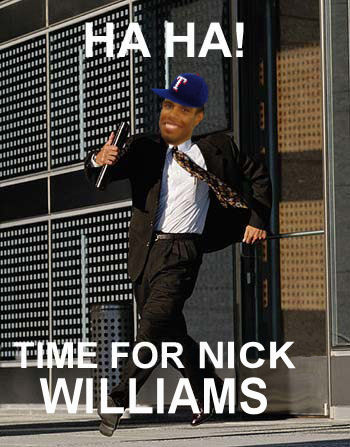 The weekly DMN top prospect slideshow has been updated to include Nick Williams, Ronald Guzman, and Wilmer Font. Maybe someday it'll have Yeyson Yrizarri on there.