The Rangers need a win. Luckily for them, Yu Darvish is back. If that doesn't work out, Alexi Ogando will return on Tuesday after being out for six weeks. Should Plan B fail, Derek Holland will take the mound and he's been the best pitcher on the staff. If Holland can't get it done, then...well, there's Ross Wolf. *ahem* Hey, the Rangers acquired Matt Garza.

It's great seeing Darvish live up to his word that his DL stint was nothing serious. It's a huge sigh of relief to see that Ogando has rejoined the rotation. It's nice to read about Colby Lewis feeling good and Matt Harrison being ahead of schedule in his rehab. But even as the starting staff is repairing itself, there's this dreadful sense of foreboding that it doesn't matter who starts the games as long as the Rangers continue to be terrible at stringing together baserunners, driving in runs, running the bases, fielding the ball, and being coached successfully.

The point being, while having to rely on a Ross Wolf, Justin Grimm, or Josh Lindblom in the rotation is a problem, it's just one of a whole bunch of problems for the Rangers right now and they don't have terribly long to figure them out. The Rangers, as it stands now, would not be in the American League playoffs. The Rangers are currently a season high three games out of first place in the American League West and a game and a half behind Baltimore for the second wild card spot.

The Yankees are like an older, more expensive version of the 2013 Texas Rangers. They are terrible offensively but have remained in the race for a playoff spot thanks to a decent rotation and an excellent bullpen. So while the Rangers face a grotesque version of themselves over the next few days, the Oakland A's will be playing a Houston Astros team that they've gone 9-0 against this season.

The simple fact is, a continuation of this current slide puts the Rangers ability to contend this season in question. Therefore, this team can't afford to lose the ball in the sun or boot a tailor-made double play. This team can't afford to leave ten men on the bases each night or be indecisive when a hit with a man in scoring position actually comes. This team simply doesn't have the margin for error to, well, error.

The Rangers need a win, but, more importantly, they need to stop beating themselves.

Here's a breakdown of the pitching match-ups against the fourth place New York Yankees:

Advantage: Ivan Nova has bounced between the rotation, the bullpen and Triple-A this season before figuring things out just before the All-Star break in the Yankee rotation. In his only two starts in July, Nova has gone 17 innings and has allowed only three runs while striking out a batter per inning. Even though Nova hasn't made many starts this season, the Rangers are catching him while he's red hot. It's basically exactly what the Rangers don't need right now.

The last time Yu Darvish pitched, he gave up five runs while losing to the Houston Astros and then he found himself on the disabled list. That's maybe the low point of Darvish's entire career. But, with a two week break, Darvish should be rested up for the second half. He's the Rangers' ace and they sort of need him to go historic on the league. No pressure or anything.

Advantage: This is the passing of the torch game. Derek Holland will defeat Andy Pettitte and then absorb all of his unbeatable left-handed postseason powers which Holland will unleash on the league this October. Or, Holland will give up an ill-timed three run home run and then Rangers won't score at all in any of Holland's remaining starts. These are the only two possibilities that I can foresee.

Advantage: This is likely either going to be Wolf, Justin Grimm or Josh Lindblom, and either way, it doesn't make much difference. They're basically the same pitcher. And they're all pitching poorly right now. Derek Holland vs Hiroki Huroda. Neat. Hiroki Kuroda isn't pitching poorly and hasn't pitch poorly against the Rangers in his career. Hopefully the Rangers will have already won the series by this point. 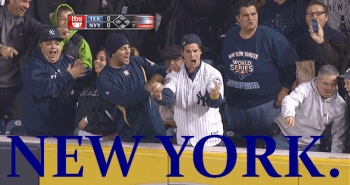 Rangers' Record vs. New York: 2-1 (All at Yankee Stadium)