Top ten things that are currently better than the Texas Rangers' offense:

Here's a breakdown of the pitching match-ups against the contending Cleverlanders of Cuyahoga County:

Advantage: Martin Perez was the recipient of bad luck in his last outing on Sunday when the defense decided to throw a carnival of clownball for him against the Orioles. Perez has pitched very well since rejoining the rotation but has had a couple of less than stellar outings the last two times out. Perez faces a challenge against an Indians team that can actually hit - second best in baseball with a wRC+ of 113 against left-handers - but the Rangers need him to come up big like he has over the last month.

Corey Kluber has been a fantastic surprise for the Cleveland Indians this season. Kluber has allowed three or fewer runs in 12 of his 16 starts and was a fantastic pain in the butt for the Rangers back on June 11 when he went eight innings and allowed one run. The 'ger offense seems even more pathetic now than it did then, so this could be ugly.

Advantage: The Rangers missed Justin Masterson when the Indians came to Arlington in June but I wouldn't say that they were sad about that fact. Masterson is having a bounce-back year after a lackluster 2012 campaign and that has likely been in no small part due to a huge strikeout increase by the spindly right-hander.

Advantage: It's a battle of horrifying peripherals. Gasp at Jimenez's 4.92 walk rate! Heave at Ogando's 38% ground ball percentage! Lose your sanity while pondering how all of this adds up to a combined record of 11-7 and then slap Harold Reynolds.

Ogando hasn't started a game against the Indians since September of 2011 but Jimenez pitched against the Rangers on June 12. In that game, Jimenez walked four and gave up four hits, but allowed only one run because the Rangers' offense is worse than Shakira pooping a chicken. 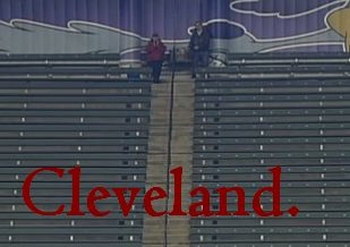 Rangers' Record vs. Cleveland: 1-2 (All at The Ballpark)