Weird things happens when the Rangers play the Orioles. They're apparently cosmically tied together somehow to cause baseball mischief. Maybe that's why the MLB schedulers decided to make the Orioles the last team the Rangers would face for the first time in 2013.

It's damn near the mid-summer classic, but the Rangers finally play the Orioles where surely there will be dueling perfect games or multiple unassisted triple plays or something.

Maybe this all happens because the Orioles have been collecting Ranger castoffs over the last several years. There's been so many 1000 Ballpark Way to W Lee St trips by former Ranger players that a former Ranger (Pedro Strop) was dealt to acquire tonight's starter, former Ranger, Scott Feldman. The manger of the Orioles is former Rangers' manager Buck Showalter, of course. The current Oriole roster also includes recent Rangers such as Darren O'Day, Tommy Hunter, and Taylor Teagarden.

Oh yeah, and Chris Davis. You may remember Chris Davis. He's the guy Keith Law said would be a bust. Well, thanks, KLaw. JD listened. Now Chris Davis is baseball's leading vote-getter for the 2013 All-Star Game and leads the world in home runs with 33 dongs.

But Chris Davis has never hit four home runs in one game. Not yet at least. Let's give it a couple of days. Of course, then-Ranger Josh Hamilton did that last season. Against the Orioles.

This is also the Orioles team that the Rangers played in the very first AL Wild Card play-in game. This will be the first time these teams have played since that game in October where the Orioles came to Arlington and beat Yu Darvish with Joe Saunders on the mound. I still don't understand how that happened. The Orioles were 2-5 against the Rangers in 2012. The Rangers were 50-31 at home last season. It doesn't make sense.

Then again, neither did the series that began exactly three years ago today on July 8, 2010. That's when the Orioles came to Arlington with a record of 26-59 (to put that into perspective, the Astros are currently 32-57) and swept the Rangers in the final series before the All-Star break. The Rangers had just traded for Cliff Lee and were 50-35 at the time that series began.

And yet, somehow, it being Baltimore versus Texas and all, the then worst team in the American League swept a Ranger team that would represent the American League in the World Series that year. The Rangers will be looking to return the favor to a much, much better Orioles team this week.

On a more positive note, it was, of course, at Camden Yards that this happened:

So two pretty good teams will play a four game set a week before the All-Star break. If it were any other two teams, that would merely be a mid-week series filled with potential intrigue. But because it's Texas and Baltimore, there's a good chance it could mean something bizarre. Here's to a Yu Darvish 21 strikeout game or Nelson Cruz hitting three home runs in one inning.

Here's a breakdown of the pitching match-ups against The Fighting Showalters of Baltimore:

Advantage: I'm sure if you asked Derek Holland, he'd make a fart joke, but eventually he'd tell you that somewhere along the way, Scott Feldman mentored him regarding being a Major League starting pitcher. When Derek Holland joined the big leagues, in 2009, Scott Feldman was then having his best season and was considered the team's ace. Now Feldman is a Baltimore Oriole because that's what all Rangers eventually become.

Now, in 2013, Derek Holland is having his best season as a Ranger and is topping the rotation along with Yu Darvish. Feldman is making his second start for the Orioles and second against his former team in 2013. Back on May 6 in Chicago, Feldman pitched seven innings of shutout baseball as the Cubs beat the Rangers.

Advantage: Martin Perez has been pitching about as well as could be expected since coming up last month. Since Perez was recalled from Triple-A on June 22, he's 2-0 with a 0.94 ERA and Texas has won all three of his starts. Perez allowed one unearned run in 5 1/3 innings against Seattle in his last outing and hasn't allowed an earned run since the second inning in his start on June 22 in St. Louis.

One thing to keep an eye on with Perez is how quickly Ron Washington gives him the hook. In each of Perez's starts since being recalled, he's been pulled around the 80-85 pitch mark (82, 79, 87) even while pitching well in the game. Basically, unless Perez has earned some trust, if he allows a baserunner, and he's over 80 pitches, he's coming out.

Zach Britton, like Perez, rejoined the rotation for his club in late June and as pitched well. Britton has allowed three or fewer runs in each of his four starts including seven innings of two-run ball in his last outing against Chicago. Also like Perez, Britton doesn't really strike many guys out. In fact, Britton has as many strikeouts as walks (12/12) in 2013.

Advantage: Rosh Wolfblom (as we'll call the mystery pitcher of the Rangers for Wednesday) will be coming out of the long man role in the bullpen to make a spot start now that Nick Tepesch has found himself on the disabled list. With the All-Star break coming up, and Alexi Ogando nearing a return, this spot in the rotation should be a one-time deal and either Lindblom or Wolf should be up to the task of giving the Rangers the four or five innings that Tepesch had been giving the Rangers of late.

Advantage: Yu Darvish had such a frustrating start against the Astros the last time out (six innings, five runs, four walks) that he told the DFW media that he considers himself a breaking ball pitcher and wants to get back to doing what he does best. So, we'll see if that means he's going to throw everything off his slider or if he's just trolling Gerry Fraley. Regardless, Yu Darvish is ten times the pitcher that Chris Tillman is even if Tillman is enjoying a 10-3 record. But, as we've learned, even Darvish can lose a game to the Astros on any given day.

Darvish also has two straight outings of allowing four walks. Four walks in a start matches his season high, but, up until his June 30 start against Cincinnati, was also something that he hadn't done since his second start of the season back on April 7. With those eight walks in his last 12 2/3 innings, he's back up to 3.09 in BB/9 which is something to keep an eye on. 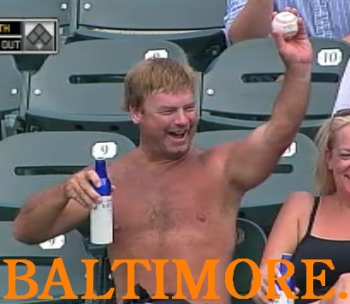