Ian Kinsler said recently that the Rangers current eight game winning streak has been like surfing on a big wave. That's Kinsler-speak for take it one game at a time.

"Ride the wave," second baseman Ian Kinsler said. "Just play hard every day and come to win. That's it. ... The confidence level of everyone on the club, we all understand it's not one person, it's a collective group.

In that case, just call Kinsler Bodhi at Bells Beach. The Rangers are riding their biggest wave since July of 2011 when they won 12 straight. In 2012, the largest winning streak that the Rangers enjoyed was seven games. The Rangers are currently in a stretch where they've won 13 of 14 ballgames. The last time the Rangers had a stretch of success like that was in June of 2010 when the Rangers won 14 of 15.

Heck, even the Rangers have lost twice to the Houston Astros in 2013. One of those times, Yu Darvish was on the mound, believe it or not. You have to give credit where credit is due and a focused Rangers team riding that wave deserves our applause for turning their season around regardless if this has happened because the Rangers have played the Angels a bunch of times or not.

In fact, if we're quick to dismiss this run, it should be noted that the Rangers are also 18-11 against the teams (BOS, DET, OAK, TBR) that would join them in the American League playoffs were the season to end today. The Rangers have a winning record against each of those four teams that represent the best that the AL has to offer.

Now the Rangers return to Arlington after the most successful ten game road trip in franchise history and are rewarded with yet another last place team in the form of the NL Central basement dwelling Milwaukee Brewers. The last time we saw the Rangers at The Ballpark, Geovany Soto, Leonys Martin, and Adrian Beltre were each hitting walk-off dongs in the same series and Darvish was having yet another 14 K performance.

Should the Rangers continue to stay on top of this wave that they're riding, they'll be hanging ten straight in the standings.

Here's a breakdown of the pitching match-ups against the bratwurst biting, beer guzzling Brewers of Milwaukee:

Advantage: Alexi Ogando has been the weak link in the rotation chain during this stretch of good baseball. His last time out, Ogando had perhaps his best outing since returning to the rotation in late-July. And yet, that outing comprised only five innings of two-run ball against the Angels. Ogando mustered four strikeouts -- his most since June 05 -- and was inconsistent at best with his command which led to yet another short outing.

I'm no scout, but the interesting thing to me about Ogando's last start was it seemed like he could throw his fastball for strikes when he let go and just threw the baseball. When Ogando was around 95-95 mph with his fastball, he was throwing strikes. However, when Ogando would go to a more measured, starters' approach, while sitting around 92-93 mph, he couldn't find the strike zone.

It'll be interesting to see what Ogando is working with tonight but the fact that he pitches his best when he throws like a bullpen pitcher doesn't do much for the theory that he's a starting pitcher. Unfortunately, for the Rangers, it doesn't look like Colby Lewis or Matt Harrison are coming to the rescue any time soon.

Marco Estrada has made 13 starts this season. But, because of injuries, only two of those starts have come after May 29. Before getting hurt in May, Estrada had the makings of a decent season going. In that respect, he's kind of like the Milwaukee Alexi Ogando. That comparison holds more water when you consider the fact that Estrada was a relief pitcher for the majority of his 75+ big league appearances before the Brewers converted him to a starter last season.

In Estrada's last start, he one-hit the SF Giants over five innings of work. Estrada has never thrown a single pitch against the Texas Rangers. This is either going to be annoying or fun. I refuse to believe there is middle ground.

Advantage: Matt Garza allowed four runs to the Houston Astros last Friday. That is unacceptable and clearly the Matt Garza trade is the worst thing ever. Well, until it isn't. After all, Garza has allowed only 14 runs in 47 1/3 innings in his career against the Brewers. That includes a seven inning, one run, ten strikeout performance against the Brew Crew back on June 27 of this season.

I've never heard of Tyler Thornburg before. If I play word association with Tyler Thornburg's existence, he makes me think of the The Wild Thornberrys. So, thanks for that, Tyler. I do know that Thornburg has made two starts, spanning 12 innings, in his entire big league career and didn't allow an earned run in either of them. Hopefully the Rangers can blemish that up a little for him. 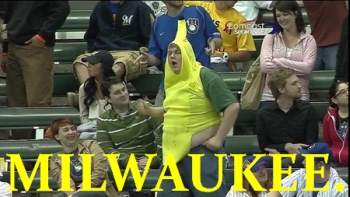 Rangers' Record vs. Milwaukee: 1-1 (All at Miller Park)