Given the Rangers' recent schedule, no one would feel sorry for us were we to complain about the luck - or absence thereof - of the pitching match-up draw. As we know by now, the Rangers have turned their season around while facing some less than stellar competition this August.

And there's reason to believe that the good scheduling fortune will continue for the Rangers over the rest of the season. Of the current American League contenders for the postseason, the Rangers will face the lowest average opponent's winning percentage on their remaining schedule.

But before we condemn the Rangers for being paper contenders propped up by a cakewalk August, let's not forget that Texas survived a month of June where they had the likes of Boston, Oakland, St. Louis, New York, and Cincinnati on the schedule. The Rangers made it through that stretch and are now making hay with what's been presented to them.

So, just in case you're so inclined to plainly state that the Rangers have it easy the rest of the way, consider the following:

The Rangers play the Mariners six times and the Astros & White Sox three times each over the next twelve games. Sounds good so far, right? After all, those three teams have a combined record of 140-220 which is an inglorious winning percentage of .388. But here's where it gets tricky. Within those twelve games, the Rangers are scheduled to face Hisashi Iwakuma twice, Felix Hernandez twice, and Chris Sale once.

That three-headed monster is composed of about a quarter of what was the 2013 American League All-Star starting pitching staff and the Rangers get to face them five times over the next twelve games. It's not always about what team you face, but which pitcher you end up drawing. The Rangers are now a team built on strong pitching. Put the Rangers up against an All-Star caliber starter and you render the advantage inert.

So, yes, the Rangers do have a clearer path to the postseason than most teams, but the Rangers are not getting off so easy just yet.

Here's a breakdown of the pitching match-ups against the team that Jack Zduriencik shoddily built:

Advantage: Derek Holland isn't among the American League pitchers that compose any percentage of what was the 2013 American League All-Star starting pitching staff. That's because Hisashi Iwakuma took Holland's spot. Regardless of that snub, Holland has been one of the best pitchers in the American League this season. Instead of being lavished with approval in New York, however, Holland's reward on the national stage was being bullied on a FOX broadcast by Joe Buck. The only thing left to do now is demand Buck do a Harry Caray impression during Holland's World Series MVP interview.

After starting the year with 13 starts of three or fewer runs through mid-June, Hisashi Iwakuma has allowed four or more runs in six of his 11 starts since. That includes allowing four runs to the Rangers at The Ballpark on the Fourth of July. In his career, Iwakuma has now allowed 10 runs in 26 2/3 innings against the Rangers at Safeco while allowing 9 runs in 14 1/3 innings at The Ballpark.

Advantage: Marteen draws The King. It's worth noting, I suppose, that Martin Perez has probably been the Rangers' best non-Yu Darvish starter over the last few weeks. In fact, Perez is coming off the best start of his career when he went the distance against the Astros on Sunday.

Perez struck out a career-high eight batters and came within a strike of completing the first complete game shutout of his career. Before you say, "Eh, it was just the Astros," keep in mind that Matt Garza and Derek Holland had allowed seven runs combined in the previous two nights against those Astros.

And yet, as good as Perez has been of late, there's Martin Perez-developing-before-our-eyes good and then there's Felix Hernandez-is-probably-the-best-pitcher-on-the-planet good. Hernandez is likely having his best season as a big league pitcher and that's a scary thought. He's on pace to top his career best K/9 rate while walking fewer than two hitters per nine innings for the first time of his career. Hernandez has allowed two or fewer runs in 18 of his 25 starts and hasn't allowed more than three runs in a start since June 20.

Advantage: I recall Erasmo Ramirez coming into a game for the Mariners on the same night that Yu Darvish made his Major League debut last April. I remember this because I said out loud, "Holy crap! 'The Eraser' is back?!" You see, the Rangers once had an Erasmo Ramirez of their own.

From 2003 to 2005, the original Erasmo toiled in the bullpen on some awful Rangers teams. His penchant for inducing ground balls and double plays earned him the nickname The Eraser. Alas, as delight filled my thoughts at the prospect that The Eraser had returned, I noticed on the scoreboard that this new Erasmo was born in 1990. I then recalled that our Erasmo never seemed a day under 65 years old.

Now here we are some 16 months or so later and Erasmo Ramirez still isn't The Eraser and he certainly isn't Yu Darvish. 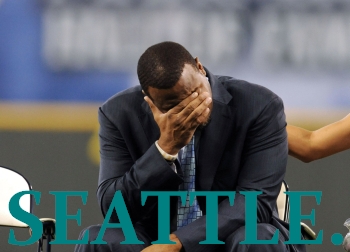