Four months ago, Nick Tepesch was demonstrating the poise of a veteran in the Rangers' rotation. Four months ago, Justin Grimm was still a member of the Texas Rangers, and in the rotation too, with Matt Harrison making his final start in 2013 just a few weeks prior. Four months ago, Colby Lewis was perpetually weeks away from joining the rotation before an endless string of setbacks ended his season before it ever began.

Four months ago, Joe Ortiz was still Joe Ortiz, instead of Joseph Ortiz, and was one of the better early-season stories on the pitching side. Four months ago, Neal Cotts was toiling away in Round Rock making the adjustments with Brad Holman that would lead him back to the Majors for the first time in four years. Four months ago, we had no idea that Cotts would become the season-long best story out of the 'pen.

Now, four months from then, the Rangers have weathered a rocky season's worth of changes. A season which has held names such as Robinson Chirinos, Joey Butler, Cory Burns, Chris McGuiness, and Kyle McClellan. This patchwork catamaran has stayed afloat and is currently sailing with a 78-55 record.

Two days from now, on September 1, we'll see some of those names again as rosters expand. Berkman will be back to see if he can muster an OPS of .965 again for a month. Nick Tepesch and Alexi Ogando will be back to form a three-headed No. 5 starter monster with Travis Blackley.

Four months ago, all was quiet on the Neftali Feliz Tommy John rehab front. Today, we find ourselves on the verge of Feliz making his long-awaited return:

Two days from now, the Rangers will have a month left before the real fun begins. Let's go!

Here's a breakdown of the pitching match-ups against Major League Baseball's most nondescript team:

Advantage: Yu Darvish gave up a home run to Adam Dunn six days ago and somehow we -- the collective Internet -- decided it was time once again to define what an ace pitcher is.

Sabermetricians might argue that Yu Darvish is having a fantastic No. 1 starter type season because he's fifth in the American League in fWAR, third in bWAR, second in Adjusted ERA+, fifth in FIP, first in xFIP, and tops all of baseball in SIERA.

Traditionalists have to love the fact that Darvish leads baseball in strikeouts and Ks per 9, is second in the AL ERA, third in WHIP, has allowed the fewest hits by a starter, and fits the narrative of dominant.

So what's the problem here? Why can't Darvish merely be appreciated without caveats and qualifiers?

Well, for Darvish, it's simple. He's won just 12 games. That's good enough for only seventh best in the American League. How, after all, can you be called great if Jeremy Guthrie has more wins than you? Darvish has lost a game to the Houston Astros this season. The last two times out, Darvish took the mound against Erasmo Ramirez and the Seattle Mariners and Hector Santiago and the Chicago White Sox and the Rangers lost both those games. (It should be noted that the Rangers scored a total of four runs in those two games. But, you know, aces win.)

Maybe Liam Hendriks is a winner.

Advantage: Now, I know Matt Garza is a bulldog and a gamer, but he hasn't allowed fewer than four runs in a start in a month. On July 29, Garza allowed three runs against the Anaheim Angels. Since then, he's allowed 4, 4, 4, 5, 4 runs in his five August starts. It's okay though because the Rangers went 3-2 in those starts.

Advantage: Remember when Kevin Correia inexplicably held the Rangers scoreless over eight innings in an eventual 5-0 loss during the last game played between these two teams back in April? No? Yeah, I've blocked that out of my memory, as well.

We can solace in the fact that Correia has made it beyond seven innings in a few games since that game against the Rangers this season. Correia has also allowed zero runs in two other starts in 2013. Therefore, the Rangers have some company in having been dominated by Kevin Correia, if that makes anyone feel better.

The Rangers have gotten a quality start out of Travis Blackley. Blackley barely scraped by within the parameters of the definition of a quality start his last time out when he allowed three runs against the Mariners in six innings. Anything the Rangers get out of Travis Blackley that isn't a dumpster fire from this point forward is all gravy. The rosters expand on this day, so, if Blackley is terrible, we could see any number of reinforcements from the newly tumescent bullpen. 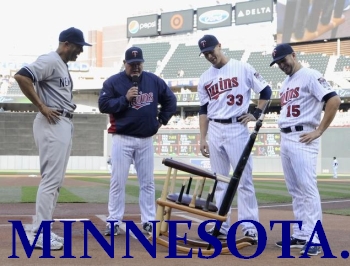 Rangers' Record vs. Minnesota: 2-2 (All at Target Field)