The Rangers send their three best pitchers to the mound, over the weekend, against Oakland, to try to make up ground on the A's, lest we start eyeing Wild Card scenarios

Were the situations reversed, and the Rangers held a three and a half game lead on September 13, 2013, I'd probably feel pretty confident that Texas would eventually win the 2013 American League West title. Then again, at this point last season, the Rangers held a three game lead and they didn't win the West. The Ranger lead would eventually grow to five games with nine to play. Then again (again), six of those nine remaining games were against the A's.

Oakland, as you might remember, won five of six in those head-to-head contests, including the final three games of the season, and the rest is 2012 history.

The point is, the A's haven't won the division yet. Last season showed that, in baseball, anything can happen until that Magic Number reaches zero. The problem for the Rangers is, unlike the A's last year, they don't have multiple opportunities in the last week of the season to make up ground against their nearest divisional opponent.

This three game set is the final time the Rangers will play the A's during the 2013 regular season. That makes this series critical for the Rangers if they want to get back in the West race and avoid the play-in Wild Card game.

If the Rangers are ever going to bust out of their current September swoon, this is the series that it has to happen. If the Rangers can handle business against the A's in this series, they can put their West destiny back in their own hands instead of being forced to hope that the scum and villainy of the American League can do their dirty work for them.

Here are all of the possible outcomes we could be facing come Monday morning:

So, there you have it. By the end of this weekend we'll have a pretty good idea on whether or not we'll be watching a dogfight for the AL West title or if we'll be pondering match-ups for Yu Darvish and redemption for the '12-'13 Rangers in Bud Selig's play-in Wild Card game.

The good news: The A's are not a team from a Central division with whom the Rangers now have a record of 20-25.

The bad news: The Rangers are 4-16 in the month of September since SB Nation switched to SB Nation United. And just who started SB Nation? An A's fan. It's all starting to make sense on this Friday the 13th, isn't it?

Here's a breakdown of the pitching match-ups against Oakland's fourth favorite sports team:

Advantage: If the Rangers are going to do anything over the next month and a half, they need Derek Holland to be the Derek Holland that existed before Jason Castro scared the mustache off of him with a comebacker that grazed his arm a couple of weeks back. Since that moment, Holland's been a fairly shaky hurler with little to no command of his pitches.

Since Holland exited that game against Houston, he's walked ten batters in just over 16 innings. Holland had allowed only 15 walks in his previous 49 1/3 innings in the second half of the season.

The Rangers could really use this guy.

Advantage: The A's seem to be Yu Darvish kryptonite (career 1-5 with an ERA of 4.86) while Bartolo Colon seems to be Ranger kryptonite (career 19-8 with an ERA of 3.61, most wins by a starter against the Rangers in franchise history). This seems like a match-up destined to leave us frustrated and sad. So, because it's baseball, I'm just going to go ahead and assume a Yu Darvish CGSO.

Advantage: Jarrod Parker hasn't lost a start since back on May 22. The winner of that game? Ross Wolf. Parker also has ten no-decisions during his streak. I'd take a Rangers win over the A's and a Parker no-decision but we all know that Ace Slayer Martin Perez and the Rangers will just be going for the whole damn gusto. 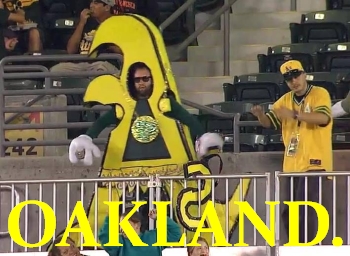