Share All sharing options for: Series Preview: Texas Rangers @ Kansas City Royals - One For The Road

The baseball season has ten games remaining, and, should the Royals perform well in this series against the Rangers, there is a marginally realistic possibility that they reach the postseason for the first time since 1985. So, basically, the Royals were last playing in October before most of you were alive. The last time the Royals were relevant to the postseason landscape, there was a Porky's movie in the theaters and Careless Whisper was the top song of the year.

What's interesting about this to me is that it seems so unlikely to folks that the Royals will make the playoffs that I've been hearing almost nothing about them having a -albeit admittedly slim - chance to do so. The Pittsburgh Pirates, on the other hand, have been season-long Cinderella darlings. Maybe the world can only take one of these stories at a time and the Pirates have seemed much more likely to actually make the postseason.

Where is the love for the underdog Royals? Have they just lost so much that they're unlikable? Is Dayton Moore considered to be such a bumbling executive that people secretly hope he doesn't stumble upon a Brian Sabean-esque run? Do you have to lose for another 75 years before you circle back around to lovable losers like the Cubs? Personally, I hope the Royals don't make the playoffs because that'll mean the Royals probably did some damage to the Rangers hopes, but I'm calling narrative hypocrites on the baseball writers out there.

I don't even know how this happened but it's shameful.

This is the final time in 2013 that the Texas Rangers will wear their road grays during the regular season. Should they win this series, they'll remain in the drivers seat for a Wild Card berth. However, should they lose, they might just put the Royals in position to steal one of the prizes in the October cakewalk...much to everyone's apparent chagrin.

Here's a breakdown of the pitching match-ups against the happy to be here Royals of Kansas City:

Advantage: Ervin Santana being pretty good again this season, instead of being the worst starter in baseball like last season, over Martin Perez going for his tenth win this season even though he didn't join the rotation until about two weeks before the All-Star break.

Advantage: I have to believe that Matt Garza is better than Jeremy Guthrie. If Jeremy Guthrie out-pitches Matt Garza, I demand at least Neil Ramirez and half of Justin Grimm back from the Cubs.

Advantage: It's James Shields. They call him Big Game James but he really should just be nicknamed Beats The Rangers Easily James. Maybe that doesn't roll off the tongue quite as well. Let's just hope the Rangers will have won the first two games of the series by this point. Though, for what it's worth, Alexi Ogando looked pretty stellar his last time out against Tampa Bay. I like 95 mph starter stuff Alexi Ogando way more than 91 mph starter stuff Alexi Ogando. 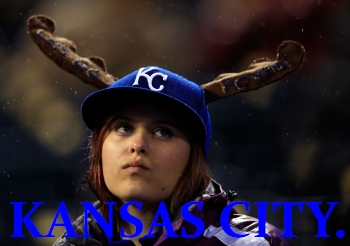 Rangers' Record vs. Kansas City: 2-1 (All at The Ballpark)